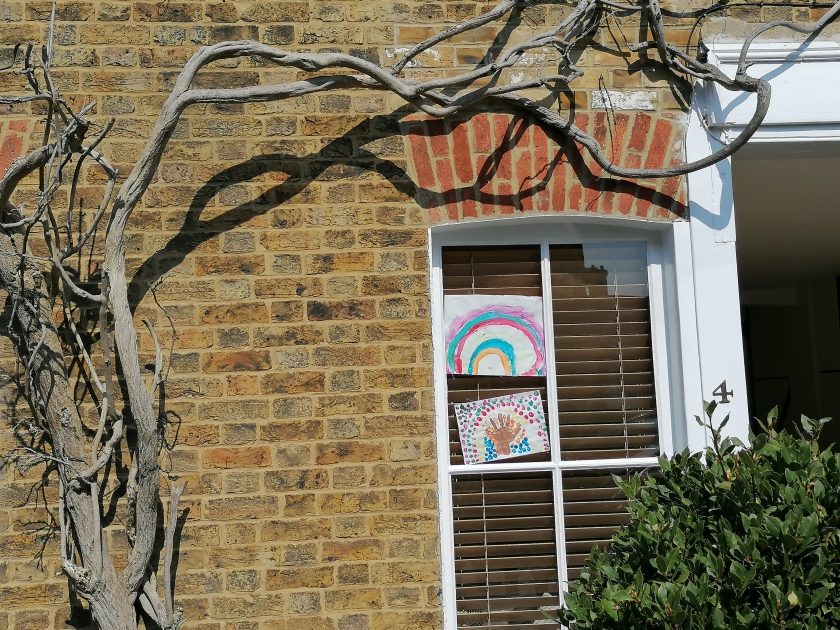 Apr 12, 2020 The Worlds Outside coronavirus, united kingdom Leave a comment 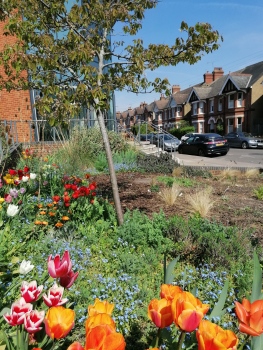 April is cruelly sunny right now, giving us the rarest of beasts- a British Easter weekend heavy with blossom and twenty-five degree warmth. After a mild, wet winter, the trees are bending under the weight of flours and wildlife is running amok. In fact, last week I saw a partridge hopping along my silent street, and the foxes and birds are loving their brief vacation from human oppression. Unfortunately, we’re all still in lockdown, with the NHS barely coping with a thousand deaths a day. As a result, we can only head out for exercise, jealously eyeing up the multitude of free-flying birds filling the spring with song.

I’m in two minds about some of the measures the government has imposed to keep people safe. On the one hand, I appreciate the severity of the crisis, and the challenge faced by police who are honestly trying to keep people safe. On the other hand, in Cottonmill this week I walked through an empty park in the lush sunshine, just a stone’s throw from severe social housing with boxy gardens (or none at all). It does seem hard not to give people the simple pleasure of sitting, socially distanced in the sunshine in their neighborhood park. I feel incredibly grateful to be surrounded by beautiful nature, from the coppiced serenity of Leyland Wood, to churchyards shadowed by ivy and the sweeping expanse of Verulamium Park. I’ve never appreciated the green belt1 more than I do right now. 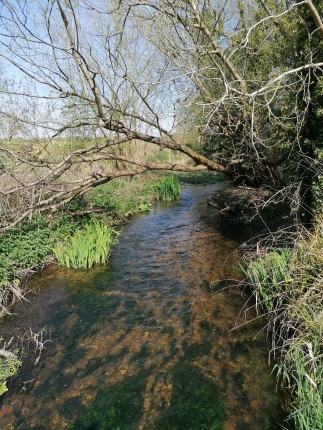 In one of those little historical ironies, the crisis has confined me in Saint Albans again. Four years ago, I got out of here, after a struggle with insomnia (and, I think, depression) left me unmotivated and sluggish. I love my friends and family, but I wasn’t doing anything- living for weekends at the pub, and working to drink. I promised I wouldn’t come back here and get into old patterns, but after a typhoon blew my plans off course in Japan, I needed to come back and save a little money. So I moved back in with my endlessly supportive parents, and promised myself that it was a short-term thing.

Then, just as I was emerging from a spartan, working winter, the next storm hit. Suddenly, I was grounded in a small cathedral town even more somnolent than usual, all but three of its high street shops shuttered for the spring. As an arrogant student returning from university for Christmases and summers, I complained2 with some exaggeration about living in a quiescent backwater town. I now find myself living for real in the fictionalised town I moaned about, unnerved- fascinated- by its mossed-over silences.

Meanwhile, the town thrums along at its new minimal pace. When I go out for my daily exercise, I see small circles of huddled conspirators in front gardens, drinking wine together in the sunshine. The joggers are multiplying, and every now and again you come across traces of an earlier time- the guy walking down the road puffing on a joint, who got a cheer from two stacked lads on bikes. But for the most part, the mood music is subdued, broken only by the conversations of the birds. I’ve never seen London Road as silent as it was this Good Friday. 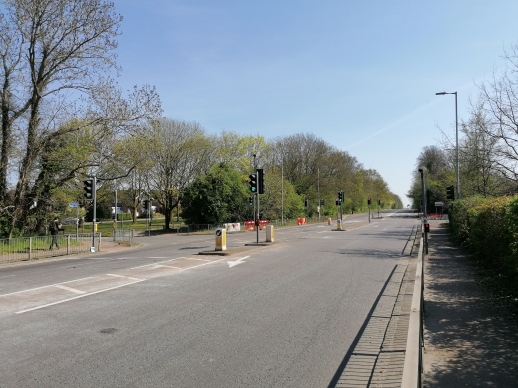 As people retreat behind painted wooden front doors, life inside those private realms blossoms. The city centre is deserted, with maybe four shops still open, but the suburbs have a jumpy, millenarian vibe behind the rows of orderly tulips and daffodils. All across the country, kids (and some adults) have been encouraged to draw or collage rainbows, and put them in their windows as a symbol of hope and encouragement for NHS workers. The rainbow as a symbol of hope has Biblical pedigree, of course; God sent it as his covenant to Noah after flooding the whole world and destroying all but eight of its earthly inhabitants. Thus the rainbow stands for hope, but also for catastrophic destruction. It’s a curious choice, but maybe an appropriate one. You’re in the flood, health professionals, but one day you’ll see a rainbow over the sullen sea. 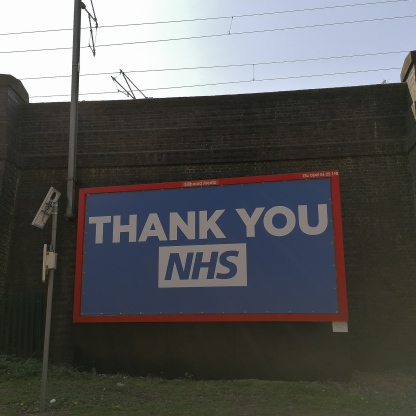 Speaking of professions of faith, I’ve seen more of them than ever before in the streets. On Alexandra Road, a banner proclaims ‘For God So Loved the World…’, leaving the rest of the verse unspoken, implicit. Elsewhere, I’ve seen written professions of faith and religious artwork taped in windows. It’s Easter, and in many parts of the world this would be utterly normal, but in button-down, unspiritual Saint Albans its something of a rarity. But the churches are all closed, and the kids are at home with nothing to do, and people are scared. 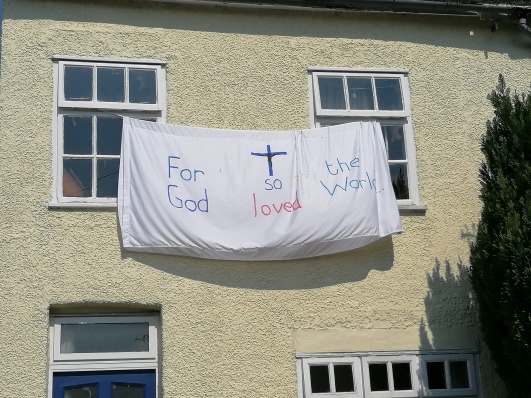 There are darker manifestations of that fear, too. Internet apocalypse fan-fiction is metastasizing, and spilling out into the real world. Anti-globalisation (and often anti-semitic) conspiracies about George Soros and martial law have linked hands with paranoia about 5G and vaccines, pulling Bill Gates into their gravitational field along the way. The internet has been clumping fringe groups together for years, building Hydra monsters out of individual strains of kookery, and in the past I’ve typically found it very funny. However, at least twenty 5G masts have been burnt down in the last few weeks, and it’s making it more difficult for emergency services to communicate effectively in some areas. I saw anti-vaxx and anti-5G graffiti on a road bridge and in a railway tunnel today. This shit is a problem.

I don’t have much more to say at the moment. I thought having more time to write would fizz me up with ideas, but instead I’m slipping into a peaceful, slightly sad stupor. Apparently, so are all the other people I’ve been tapping for information, and so my attempts to chronicle the lockdown are going very slowly. Hopefully I’ll have some stories for you soon from key workers, and from lockdowns around the world, but time feels bent out of shape at the moment.

I’ll leave you with a video from home. In England, as elsewhere, people have been clapping for the NHS workers. Maybe it’s helping morale; maybe it’s just helping the government to paper over the cracks of an underfunded healthcare system. I really don’t know. All I know is, the folks working in our hospitals and clinics deserve a fucking hand.

‘Til next time (and Remain Indoors),
From Your Correspondent in Lockdown.

1- if you’re not British and not familiar, the green belt is the area of exurban land and countryside around the outskirts of London where new building is restricted. With London growing by hundreds of thousands of people each decade, it doesn’t really work anymore, but it’s much loved.

2- to anyone who would listen.