Recently, I’ve been thinking about the idea of pilgrimage, as a journey which is undertaken not simply in pursuit of a destination, but in search of meaning within the journey itself. Pilgrimages are inherently spiritual exercises, although not always religious. One person might go on pilgrimage to Santiago de Compostela or Walsingham or Lhasa in search of God and healing, while another could return to the faraway village where their immigrant ancestors were born, in search of their roots. A third could walk the length of Hadrian’s Wall in search of a greater empathy with history, in the form of Roman soldiers, mystics and invaders. Some pilgrims lose themselves among the high peaks of the Andes to commune with nature; others sail across oceans. A pilgrim might travel China by motorbike to embrace the country’s complex cuisine, or even cross the world to follow a beloved team through an international tournament. In Tokugawa-era (1603-1868) Japan, pilgrimages would occasionally erupt like mass psychoses, and millions of normally sedentary rice-farming peasants would take to the road.

Pilgrimages aren’t always long, although in practice it often helps if they are. The essence of a pilgrimage is a journey to an unknown place, or by an unfamiliar route, and one that causes transformation in the pilgrim. This could be religious or spiritual or personal growth, but the journey must have meaning as well as the destination. The journey can’t be too easy, or transformation is unlikely- it might be long and arduous, and it might be so costly that it’s only possible once in a lifetime. It might cause great emotional upheaval, or simply force the pilgrim to step far outside their cultural standards and practices. By contrast, a holiday doesn’t need to be any of these things, and doesn’t tend to change you.

A quest also features a long, transformative journey, but a quest has measurable standards of success (attainable or otherwise). Find the sacred stone, overthrow the regime, get the girl. A pilgrimage, however, has no such illusions, and no obvious measure of achievement.

I travelled to Canterbury recently, in search of someone who could help me to understand pilgrimage better. Canterbury was the bustling hub of English pilgrimage, the site of Thomas a Beckett’s murder, and the place writ down in a middle-English masterpiece, Geoffrey Chaucer’s Canterbury Tales, the stories of a group of pilgrims. It’s also a central piece of England’s deep history, the site of England’s oldest surviving church and its first cathedral, and the centrepiece of its first Christian kingdom. Generations of invaders and settlers marched inland from the coast here- Romans, Vikings and the Anglo-Saxons themselves. The roots of England are here in the low furrows of eastern Kent. Canterbury and my own hometown were once umbilically linked by Watling Street, a ‘Roman’ road with pre-Roman roots. 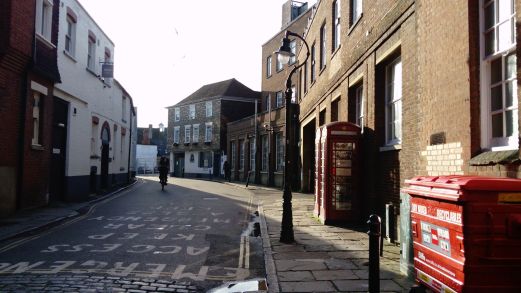 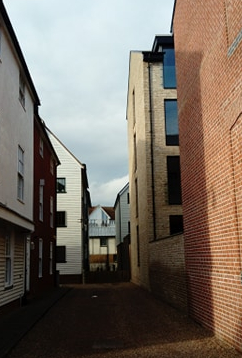 To be honest, I didn’t have much success. Despite some beautiful buildings, I didn’t entirely warm to Canterbury on first impressions. It seemed wealthy and disconnected. The love of heritage in England easily bleeds into stuffiness, and the city clearly has a problem with homelessness despite its comfortable southeastern affluence. No doubt it’s a failure of my imagination, but I couldn’t picture it as a millenium of pilgrims had seen it, gas-stoked lamp-light at the end of the last day’s travelling, inn and lodgings for a weary body. Maybe it was a little bit too close to home.

However, I did visit three churches. At Saint Martin’s, the oldest church in Britain, the walls are secreted over generations, like layers of exoskeleton. Modern repairs to the nave plaster over crumbling Norman masonry. A hagioscope (basically an angled hole) in the Norman core of the building allowed lepers to watch church services from outside, since they were excluded from the congregation. The Norman tower adjoins an older, seventh century Saxon west wall.  In one corner of the building is a fragment of even older, Roman wall, from a time when Christianity was seizing the crumbling empire. Each church was superimposed on the last, through the ages.

At the city’s cathedral, I saw plaques for Brits who had expired in all corners of the world, from Kano to Chitoor, from the Thirteen Colonies of America to the killing fields of WW1 Belgium. There was a time when the main reason young, working men travelled was for war. I hope we’ve left that time behind forever- I’ve been anxious about a coming conflict lately, as global powers push each other to the brink and become less willing to co-operate. I’m not a man of God, but I stopped awhile in the flickering orange of a small chapel, to offer a prayer for peace. Downstairs, amid the solemn quarter-light of the crypts, two young teenagers ran around singing and blaspheming until the Cathedral constable (honest) tipped them out.

And at St. Peter’s, I met Jo, the rector of St. Peter’s and two other local churches, who was leading Eucharist for her parishioners. She was happy to speak with me, about pilgrimage, her life at home and abroad, and her work in the community; she unfortunately didn’t have much time, but we agreed to meet and talk in the future. I may return to Canterbury in March, to attend a lecture and to talk to some people who can tell me more about the Christian tradition of pilgrimage. At the same time, I sense Jo has an interesting story, and I’m looking forward to learning more of it. In the meantime, I’m hoping to lay the ground for another journey of my own.

I am struck by a feeling which is at once powerful and elusive, difficult to describe. To nearest approximation, I feel as if I’ve left the screen room during the biopic of my own life, and am standing in the lobby alone, stretching my legs. It’s as if decisions I take in this time are part of a closed ecosystem. As such, decisions don’t have knock-on effects outside of this time, and by extension they don’t carry much weight. Not a rut so much as an interlude, it’s a very specific and strange emotional state, and it doesn’t make writing easy. I’m not all that satisfied with what I write at the moment, but I figure I’ll keep on writing as I work out where life takes me.