I was sitting on a ferris wheel reading about John Bercow. Some people would call this rock bottom.

I don’t know what it says about the times, or about me. You could say that the internet has destroyed all our attention spans. You could call it Brexit Derangement Syndrome. Or maybe it’s more specific to me. But sitting there in that little red capsule I’d commissoned on a whim to mark the last night of this phase of my journey, my eyes were drawn to the little flat screen instead of the bright lights of Kobe outside1.

Specifically, I was watching the news unfold regarding the supreme court overturning the prorogation of the British parliament. Seriously. I KNOW. I know what you’re thinking. Of course, Lewis, it’s like really good coke. Is there any greater high than watching an elderly woman deliver a clipped précis of a court ruling while no-name politicians react in real time on Twitter? The only problem is the high wears off, and then you’re sitting there mad-eyed trying to remember your password for the New Statesman and calling that guy from Brent that everyone knows is shit but is always awake at 3AM and can deliver you unhinged Spectator columns calling for civil war. We all have our vices.

Back up a couple of days. Fresh from a couple of hazy nights in Hiroshima with the old crew, I was on my way to Takehara, ‘origin of bamboo’. This little salt-panning and sake-brewing coastal community isn’t much of a tourist pull, but it’s a great place to see what a pre-modern Japanese town looked like. 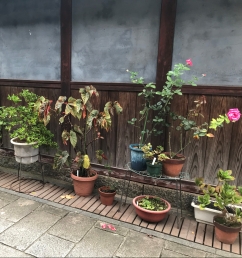 Passing through the town centre, which was all shuttered and dead at eleven-thirty on a Saturday, I felt a bit like the Rapture had happened when I wasn’t looking. The slow bleeding of small-town Japan goes on apace; I guess there are no young people to pull Saturday shifts. Anyway, on to the old town, which consists of two long, beautifully maintained boulevards of eighteenth and nineteenth-century houses criss-crossed by numerous side streets and alleyways.

So I drifted back into Japan’s feudal past again. There was the old Taketsuru sake brewery, doors battened, with a grouchy warning not to even take photographs. Bad luck, this blogger doesn’t play by any fuckin’ rules. Anarchy in the historical preservation zone2. Opposite the brewery was the Matsuzaka residence, probably the most aesthetically beautiful of the houses with its careful asymmetry, sliding panels and well-placed windows. The Yoshii house lay further down the street- the oldest building on the street which doubled as a military headquarters for the feudal domain. At the Mitsumoto residence round the corner, the sole member of staff fussed around me, instructing me on exactly where my shoes should go at each stage in a way that made me feel about three3– I think she meant well.

I stood on the wooden platform of Fumei-kaku Shrine and stared out over this sleepy little community, and weighed the feeling of isolation. If I think this place is too quiet in 2019, imagine what it felt like in 1819: surrounded by mountains in an underpopulated valley, with no broadband, no radio, no telegrams. Very little movement, either, as most people stayed put for most of their lives. No news of the outside world, except what came in by ship with the traders and travelling monks. It’s enough to make you shudder. Three cheers for the architecture; none for the cloistered life. 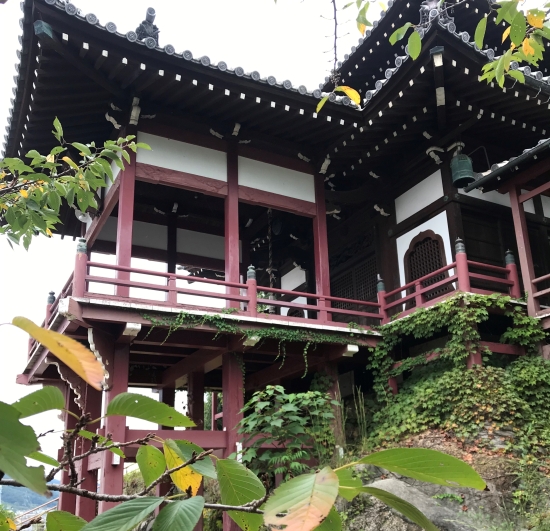 Sonic and the Bay

After Mexican food with a former student, it was onward to Kobe, the bay city which I planned to move to when I first dreamed of Japan. Kobe is squeezed into a thin strip between the sea and the peaks of Mount Rokko, so it’s high-density even for a Japanese city, with few parks to break up the apartment towers. So they built out into the sea instead, reclaiming land and making Kobe Harborland into the city’s most famous locale.

I liked the marina. Blood-red, Kobe Port Tower sprouts from Meriken Park, and the building scattered around it are whimsically nautical. The view from the tower is good; not great, but good, showing you the tight constraints which Kobe is hemmed in by. Behind you is a multi-level flyover stretching far along the coast, which usually I’d find ugly, but somehow here gave the welcome impression of a city in constant motion. Stretching out to sea, the grey landscape of artificial islands recalled one of my favourite levels on the best Sonic game, Metal Harbor on Sonic Adventure Battle 2 (2001)4.

And Kobe… hmm. I wonder if I’m just at the stage in a trip where all cities start to blend together in one amorphous maze of carparks and outlet malls and tourist traps. I passed through the pleasant Ikuta Shrine, where an unknown ceremony was taking place, and worshippers were tying paper fortunes to a wooden frame next to a tiny manmade waterfall. In Nankinmachi (Kobe’s Chinatown) I filled up on some street food, slipping between the jostling crowd to sample some excellent cha siu bao and other, unspecified dumplings5. Notably, all of the big port cities I’ve visited on my trip has had its own Chinatown: Yokohama, Busan, Nagasaki and now Kobe. People go where the tide takes them.

But Ijinkan, the old European quarter of the port city, was an overpriced mess. Unlike the fantasy Italian villas of Nagasaki, I didn’t much like the houses here. Perhaps it was because they were built by diplomats, and really, is there anyone duller than a diplomat? The German merchant’s stately pile, built to mimic a European castle, seemed somehow both kitschy and boring. They’re all squashed too close together, and to add insult to injury, they’ve been divebombed by modern mass-produced apartment architects, with all the grace and precision of a pigeon shitting on a statue from a great height.

My long walk on Mount Rokko was similarly disappointing. I set off from the very well-heeled suburb of Ashiyagawa, perhaps the only place in Japan where I’ve seen really big houses with gates and driveways. But after an exciting stretch of scrabbling up steep rocky slopes, it tailed off into endless, sandy, scrubby forest. It all felt a bit forlorn somehow- it was my least favourite hike of the summer, for sure. I did get lost which added a bit of excitement, having taken a wrong turn at an unlabelled intersection to end up in a dried-up river valley, with barely a path to guide me. Having been warned of aggressive wild boars, I paced ahead at double speed, a bit scared that they were waiting for the perfect moment to come for me. Anyway, long story short, I’m out of the woods and writing this, so we can assume I wasn’t eaten by inoshishi.

I don’t mean to put down Kobe too much. It’s a decent city, falling in spirit somewhere between rebellious, hyper-urban Osaka and the other port cities of Nagasaki and Yokohama which I visited this summer. People here do seem a bit more relaxed than elsewhere in Japan- they jaywalk and dye their hair more, and seem a little more touchy feely than the standoffish stereotype. But I’ve reached an impasse where I’m just struggling to care about new urban horizons. I can’t really be bothered to make more fleeting friends, hence me sitting on a ferris wheel on my own like a lemon. After Hiroshima, I can’t be bothered to go out and meet the night, and anyway, after Hiroshima I don’t have the money. I know I’ve only been on the road for a month, but because much of my summer was spent in transit, it’s felt like a helluva lot longer.

And man, I miss England sometimes. I miss the pints of ale in pub gardens even when it’s obviously too cold, and the pub quiz which some team of septuagenarians (who know the quizmaster) always wins. I miss the scuzzy music venues with sticky floors and electro-swing and jagerbombs. I miss quiet country roads through flat cropland, with ivy on the walls of old farmhouses. I miss the constant, low-level sarcasm and the way that everybody is constantly trying to bring each other down to size a little bit. I miss the dark, anarchic sense of humour and the weird camaraderie that comes along with it. I miss messy music festivals, with eighty-three stages and some tit in a bad-taste dead celebrity costume jumping about in front of a Gogol Bordello set. I miss huge urban parks that bring whole communities together for two weeks in summer. Despite Brexit, I miss it all.

I really miss all my friends too, who I don’t talk to enough while I’m out here. It’s been ten years since I started at Leeds University, back in the autumn of 2009 when Two Dancers was released and the financial crisis was getting ready to engulf Gordon Brown. And I miss my even older friends, from the days of hanging out in the Orchard with a bottle of cider, listening to The Offspring and Panic! At The Disco on shitty speakers and eating pancakes on a sunday morning after Pioneer, with six of us squashed into my bedroom, sleeping on all available surfaces. And I miss my parents, who made the pancakes. I don’t think I said thanks enough when I was a teenager.

Anyway, I didn’t mean to write quite so much. I guess I’m feeling a bit emotionally raw. Next I’m off to Kyoto, to do some general work around a guesthouse and possibly help out with some music projects. After that, we’ll see how things pan out. The future is measured in days, not months or years right now.

I’ll leave you with some pictures of Akashi, which I caught the train to purely by accident but which had the community-uniting civic park I’d been looking for, in the ruins of a castle.

‘Til next time,
From your correspondent in Kobe. 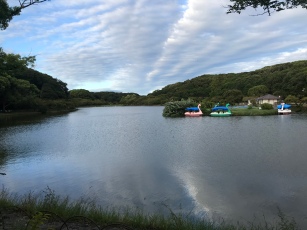 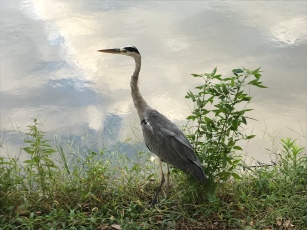 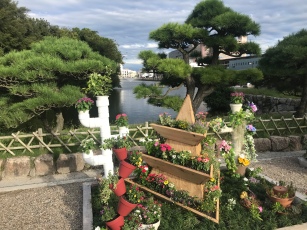 1- the view from the ferris wheel wasn’t so different from the ground-level view actually. A few more twinkling lights.

2- I am reminded of an old math teacher I had, who, bursting into a busy classroom on a wet lunchtime, shrieked: ‘what is going on? There is a PEN without a LID! There is a LID without a PEN! There is a pen and a lid which have been switched round so that THE LID IS A DIFFERENT COLOUR FROM THE PEN! This is ANARCHY!’

3- Of all the little ways you get treated differently as a foreigner in Japan, this is my least favourite. There’s this patronising assumption you get sometimes that you need every rule explaining to you five times because you don’t understand Japanese culture.

5- Unspecified Dumplings- my new-wave garage punk band. Catch us in Dalston next friday!