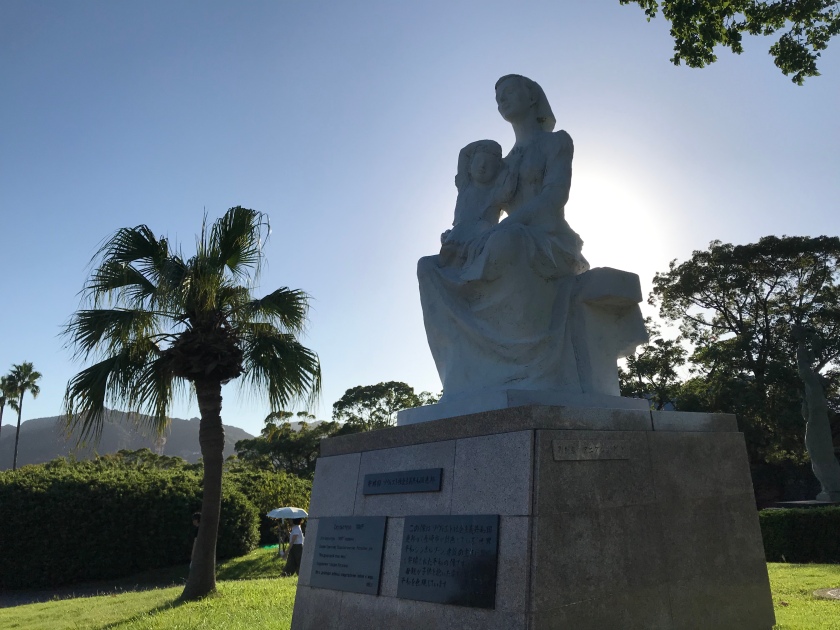 Sep 20, 2019 The Worlds Outside japan, travel Leave a comment

I liked Korea. It wasn’t just the rich, easily accessible street food, or the strong coffee. It wasn’t just the suprising boisterousness of daily life- when I went to Silloam Sauna there were people shouting across the room and jumping into the pools, which was a world apart from Japan. I liked the passion for colour in Korean temples and the rough-and-ready markets. Yeah, I liked Korea.

But I fell in love with Japan.

I was reminded of that on my return, walking through the streets of Fukuoka and stumbling across a crow-black Zen temple, the home of a warrior’s dream of peace. To my untrained eye, South Korea and Japan feel like opposites in one critical way. South Korea is all noise and colour and chaos on the surface, but its underlying principles seem to be Confucian ones, bringing a deep, fundamental harmony and order. Japan is the exact opposite for me- on the surface it’s so composed and organised, but underneath I feel this vast, untameable wildness, this fundamental sense in Japanese culture that nature laughs at rules and order (and human nature, too). Sometimes that wildness is sublimated so deep it’s hard to see, but I feel it. I’m sure I do.

As we move into late September, the weather is perfect, a soft warm sunshine that turns the world into a permanent Golden Hour. It’s almost impossible to take bad pictures in this suffusion of orange light, and it’s bloody difficult to sit down at a computer and do next-steps planning. So I’m back in Hiroshima, trying to get my head down. But first, let me tell you about Hiroshima’s unwanted twin, a place bound to it by destiny and pain. This is the story of Nagasaki.

Nagasaki was never meant to be the target. I didn’t know that before, or I’d forgotten it. Right up until dawn on August 9th, 1945, the fighter plane Bockscar was bound for Kokura in the northeast of Kyushu, the site of a weapons arsenal. But the mission was thwarted by heavy clouds over Kokura, and the plane turned around and headed for Nagasaki, which was its secondary target. Again, the target was covered by clouds, and the pilot, Major Charles Sweeney, was about to return to Tinian in the Northern Mariana Islands when a small gap opened up in the clouds. Seeing Urakami Cathedral below, Sweeney set events in motion and dropped the bomb at 11:02am, somewhat north of the city centre. Thirty-five thousand people died in a single second. Another thirty-nine thousand died in the immediate aftermath, and people are still dying of certain cancers at higher than usual rates today.

Ever since I moved to Hiroshima last July, I’ve needed to visit Nagasaki. Not so much a want but a need, stemming from a dark fascination with the awful bond of fate that ties these two cities together.  They are unwanted twins, united by the incomprehensible horror that only they share, and by a shared need to promote peace. So I felt the weight of history as I ascended the steps to the peace park, passing by a bank of neat flowers soaked in sunshine.

The Peace Park felt less primal and more formal than Hiroshima, with tidier trees and an open plaza at its centre. In the plaza, a cohort of middle schoolers from Sapporo gathered to sing together and place a memorial, while teachers held camcorders aloft.  Nearby sit various artworks donated by different countries, in particular by the Soviet Union, Czechoslovakia and East Germany in the early eighties, when nuclear war was on everybody’s mind. A truly odd statue holds prime position at the head of the park, a kind of giant Zeus in Buddhist meditative pose, but with one hand pointed at the sky as if in warning. It’s supposed to contain elements of eastern and western art. But the most arresting feature of the park is the lone pillar of Urakami Cathedral, a Catholic church which was levelled by the bomb.

Nagasaki has a tortuous, complex relationship with Christianity going back over four hundred years. It was a base for Jesuits, who spread out into Kyushu to convert Japanese peasants and lords alike. It was one of the strongest centres of Christian worship, and the epicentre of a particularly bloody persecution. Suspected Christians were brought to Nagasaki to be questioned, tortured and executed, some of them on the beach. Christianity was driven into hiding, and only emerged at the end of the shogunate, when Japan opened up to the world again. Perhaps because of this painful history, I was particularly moved by a set of melted rosary beads. Other artefacts in the peace museum included food serving sets used to feed the many homeless citizens after the war, and poems written for the peace effort by a doctor who died of leukaemia.

Through a Narrow Window

In most ways, Nagasaki was cruelly unlucky. Its one small piece of fortune was that because the bomb dropped north of its intended target, the city’s history was physically preserved. Hiroshima, by contrast was completely levelled, with only the outermost areas surviving.

And what a history. Nagasaki was a port like no other, a narrow window to the west during Japan’s long sakoku (closed country) period, and a place where foreign cultures- Portuguese, Chinese, Dutch, English- entered Japan.

First I visited Dejima, the home of the only Europeans allowed to live in Japan from 1641-1859. The inhabitants of Dejima were Dutch sailors and traders, most of whom were not exactly living their dream. Far away from all the classical grandeur and racial supremacy* of colonial Batavia, they were packed like sardines into a ‘fan-shaped island’ in Nagasaki Bay. Although there are some original warehouses, most of the island is a reconstruction, but for once I didn’t mind. It was such a beautiful insight into the weird, circumscribed lives of these sailors, who weren’t allowed to leave the island. Instead, they spent their lives drinking, shagging geisha, weighing out silk and sugar, and generally being bored shitless. From here, though, Japanese porcelain, tea, soy sauce and copper bars from Osaka spread out into the world. In exchange, the Dutch brought in cloves from Ambona (Indonesia), deerskin from Ayutthaya (Thailand), silk from Vietnam, and what the Japanese state really wanted- information about the European powers. Chinese sailors languished on a nearby island, in much the same situation. 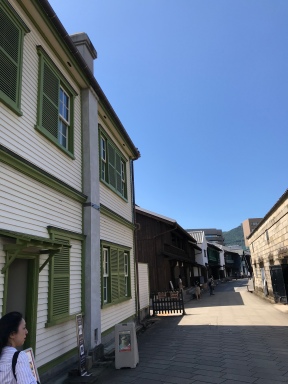 All kinds of interesting information entered Japan, as botanists, astronomers and historians turned up in Dejima, sometimes by mere historical accident. It was Japan’s gateway, and it’s no surprise that when Japan was forced to open up in the 1850s, Nagasaki was chosen as one of the country’s new international ports. And boy, was it international. In the Meiji era, as Japan began to industrialise, Dutch, English and Russian sailors and businessmen built beautiful colonial houses up on Oranda-zaka, above the bay. The Chinese community swelled too, and built several Confucian shrines, more than I’ve seen anywhere else in Japan. They’re odd places, places of worship for a philosophy which may not have Gods- honestly, it depends who you ask. I was really taken by the mosaics.

The most amazing of all the monuments to Japan’s opening for business can be found in Glover Park. Here, amongst the colourful ranks of herbs and yellow daisies, you can find the homes of mostly British magnates, who came to Japan to strike it rich or build their 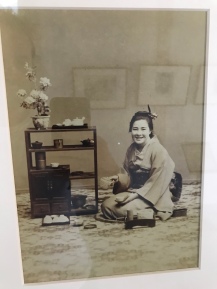 existing empires. There was Frederick Ringer from Norwich, who published a newspaper, traded tea, and opened a glamorous and generally unsucessful hotel. There was Thomas Glover, who managed shipbuilding and coal-mining and was one of the founders of Mitsubishi. And then there was William Alt, whose trade I can’t remember but who built this spectacular Tuscan villa with sandstone and a veranda and the rest. The men all knew each other; their families intermarried, although some family members married Japanese people too, donned kimonos, and got involved in Japan’s art world to boot. 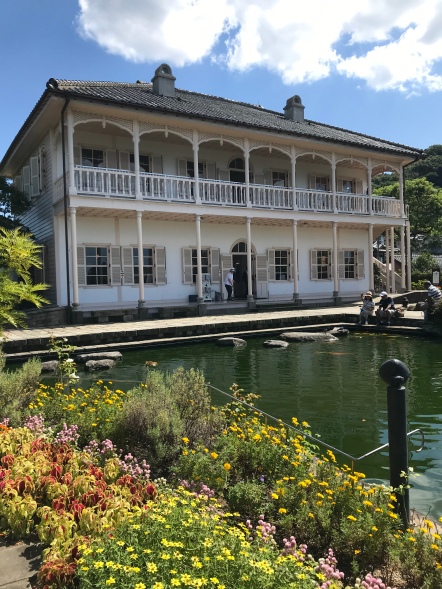 Maybe Glover Park isn’t for everyone, but for me it told an incredible story of a world getting faster and closer together in the late nineteenth century. Telegrams brought instant news, business was conducted in many lands at once, and the British continued to build their empire even in places never coloured red on any map. And in their wake, Japanese architects and shipbuilders learned new techniques, and laid the foundations for their own revolution.

And so I’m home again. Sort of. I’m staying in a hostel and I’m probably off to Kobe tomorrow; but in the meantime I’ve been taking the chance to catch up with a few old friends, and meet some new ones. I went out for a kind of blurry night at Herbie’s in Nagarekawa, got an unexpected blast of Damian Marley, and saw off Brett, my teacher buddy, who’s heading back to Canada in a roundabout way. In my free time, I sat by the riverside and cherished a rare bit of calm.

My next steps are maddeningly close to coming into focus, but until I’ve dotted the i’s and crossed the t’s and chosen the emojis or whatever, I’m not gonna share them here. It’s just tempting fate- I’ve been burned more than once this summer. I will be writing something about my trip to Kobe, and by the time I do, I should have a clear idea of what life looks like ’till Christmas. I’ll keep ya posted.

Once more for old time’s sake,
From your correspondent in Hiroshima