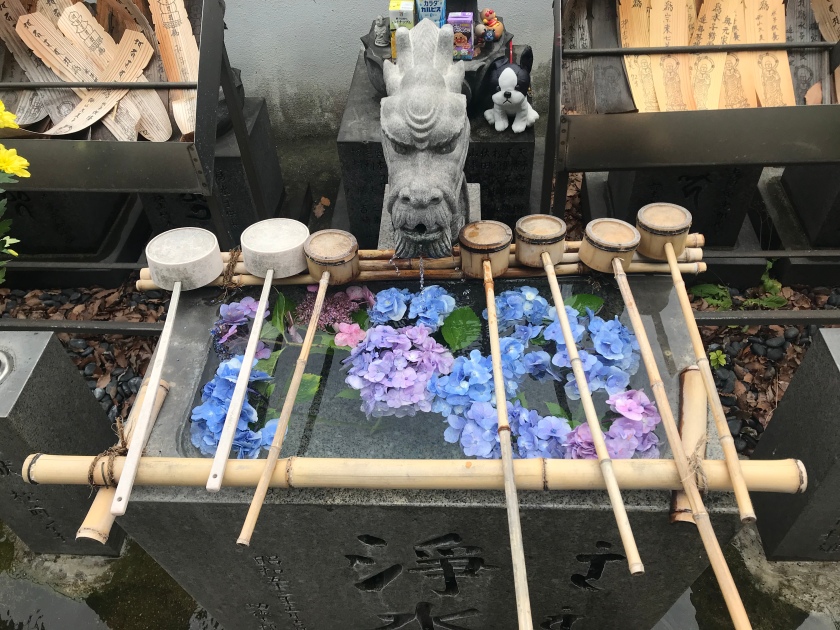 Aug 22, 2019 The Worlds Outside culture and society, japan One comment

Let me set the scene. A Shinto priest waves his1 haraegushi, a staff topped with thin strips of paper that somewhat resembles a mop, in the forecourt of Gokoku-jinja. The onlookers watch a ritual that is clearly pre-modern, a sequence of moves which has been practiced and perfected over time. On other days, the priest might bless the union of a young couple, or pray for the long life and happiness of a child. But not today. Today, a new car is parked within on the forecourt of the shrine. The man of God(s) is spiritually purifying its oily innards.

An Attempt at Investigation

What on earth is Shinto? I’ve asked myself the question enough times since I arrived in Japan. Ostensibly the national religion of Japan, it has no sacred texts, no single, central council or self-contained belief system, and therefore no recognisable dogma. There is an ongoing argument about how appropriate it is to translate Shinto kami, of which there are said to be eight million, as ‘Gods’. I reckon I agree with those that think it’s a poor translation, but an obviously better word doesn’t come to mind.

At any rate, Shinto kami are supernatural deities, spirits or forces, often connected with geographic features and physical objects (lakes, trees, Shrines, perhaps even electronic devices) in a way that the immanent Gods of other religions are not. Some are major, like Susano-o, kami of storms and rain, or Ukemochi, the kami of agriculture and food. But an endless pantheon of minor kami can inhabit tree trunks and boulders which jut out from the sea. They can be invited to enter landscape features and items, and they can be petitioned to leave if they’re causing problems. Just like Shinto shrines, landscape features which are considered sacred can be marked with a rope decorated with jagged paper strips.

Outside (mostly Western) observers were often frustrated by Shinto. The Rev. Dr. Brown marked it ‘as a religion, hollow, empty and jejune beyond any other that is known among men’– as a Christian cleric, you might have expected him to be hostile, but historians like Chamberlain who loved Japan agreed. Lafcadio Hearn, perhaps the most entertaining outside observer of Japan, was warned of the ‘disappointing vacuity’ of Shinto shrines, although he was clearly a partisan for Buddhism.

You might expect more clarity from the people who practiced the religion. However, Japanese people studying its inner workings have often been puzzled just the same. Motoori Norinaga, one of Japanese cultural identity’s defining thinkers, said as follows: ‘In ancient usage, anything whatsoever that was outside the ordinary, which possessed superior power or which was awe-inspiring, was called kami’. He also tellingly admitted: ‘I do not yet understand the meaning of the word ‘kami’.

Motoori later used an eighth-century text, the Kojiki, to try and understand the philosophical basis for Shinto. He talked a lot about ‘the Way’, a path to righteousness. But he fiercely separated it from Confucianism, with all its rules and precepts, arguing that the Japanese guiding philosophy was an unconscious thing, something which couldn’t (and shouldn’t) be rationally explained: ‘because there was the Way, no word for the Way existed’. However, some modern authors dispute the idea that Shinto is the underlying philosophy that guides Japan, the ‘soul of Japan’. Kuroda Toshio argued that the lack of rational explanation of Shinto in early Japan reflected the fact it had not yet been created as a religion. He doesn’t dispute the existence of Shinto shrines or belief in kami, but argues that there wasn’t a coherent separate religion until much later, and that during the medieval period ‘veneration of the kami was absorbed into Buddhism’. He sees the kami of medieval Japan as local deities, not part of any integrated philosophy.

However you define it, some form of ancestor worship is at the core of Shinto. Hearn wrote that ‘it is plainly revealed as the most ancient of all forms of worship […] devotion to the dead’, while the early 20th century cultural commentator Yone Noguchi wrote that ‘to respect the beliefs of the dead and act accordingly would be the true meaning of adherence to Shintoism’. Nowadays, as in the past, people pray to their deceased relatives in their household shrines. But Shinto is also deeply entwined with nature, without that duality of matter and spirit that many world religions place front and center. Shrines are found in forests and in front of venerable old trees. They can be dedicated to specific animals, particularly foxes. People can also have shrines in their home to honour their ancestors, although this practice is declining in modern Japan. A shrine usually has a torii  gate, marking the boundary between secular and sacred space, and a shimenawa straw rope on the gate or the main building.

At shrines, worshippers might give small offerings of food and drink, such as sake and fresh fruit and vegetables. Shinto shrines are often found within the walls of Buddhist temples, and it’s quite possible for believers to follow both Shinto and Buddhism2. People bow before Shrines to honour the kami and clap to ‘wake up’ their spirits and offer prayers.

Although beliefs in Shinto are difficult to pin down, certain characteristics are undeniable. One is a focus on purity, partly expressed through physical cleanliness. Upon passing the gate of a Shinto shrine, worshippers take a wooden bowl on a bamboo stick, and fill it with water from the chōzubachi (a stone basin filled with water). They wash the right hand first, then the left, before using the right hand to cup a little water and wash the mouth. Shinto isn’t unique in having purification rituals- wudu in Islam also uses water to purify the body- but Shinto brings purification into every part of religious life. The word tsumi, which now usually means ‘sin’ can also mean ‘defilement’, and used to refer to disease.

The Creation of Shinto

The folk roots of Shinto are almost certainly older than Buddhism, which was introduced into Japan in the sixth century from Korea and China. But for most of its history, Shinto didn’t have much in the way of central organization. The emperor was sacred to Shinto, but that fact had no relevance for most people.

Then, in the mid-nineteenth century, reformers building their modern Japan created State Shinto to help unify the new country. They used the writings of nationalist and religious writers from the last hundred years to turn a set of folk beliefs and rituals into something that looked much more like organised religion. At the heart of this religion was a belief in the Emperor as a divine being, the soul of the nation, using evidence from ancient texts such as the Kojiki. Children were raised to revere the emperor as the embodiment of Japan, and to be prepared to die for him if necessary. That’s how, remarkably, a religion without dogma provided the philosophical underpinning for a holy war3.

These days, shrines are well attended and people still pray regularly, but I don’t get the sense there are a lot of ‘devout’ Shintoists. In fact, I’m not sure how you even define devotion in a religion like Shinto. People attend shrines on a regular basis, bowing and clapping as is customary, and they especially visit on festival days, New Year and Obon4 being the most famous. Specific shrines may attract certain kinds of prayers, such as the young couples praying for happy marriage at Izumo Taisha, or the business-folk praying for financial fortune at Ebisu-jinja. And then there’s the ShichiGoSan, a series of rites of passage held at shrines for five-year-old boys and three- and seven-year-old girls.

The Future of Shinto

Ever since Japan opened up to western countries in the 1850s, people have worried about the future of Shinto. Yone Noguchi, writing during the First World War, suggested that ‘the atmosphere of a city […] does not tend to cherish the somewhat ghostly and shadowy sense of ancestor-worship’. After the Second World War, when the emperor disavowed his own divinity on New Year’s radio, this could have been a death blow to a religion built on the mythology of an ancient emperor descending from heaven.

However, Shinto not only survived but thrives into the modern era. It has political influence, too- in 2013, 16 out of 19 cabinet members belonged to the Shinto Political Alliance organisation. In fact, Shinto has again become entwined with the Conservative nationalist politics of the era: Shinto organisations like the Shinto Seiji Renmei have been pushing for more ‘moral and patriotic’ education, while also opposing globalisation and free trade.

Most famously, Conservative Shinto organisations have been pushing politicians to visit the controversial Yasukuni Shrine that honours Japan’s war dead (including many Class A War criminals), for example. I visited Yasukuni recently, and it was an uncomfortable experience. There was a visible and clearly uneasy police presence outside the shrine, where some elderly ex-army vets raised a flag and gave a salute. Inside the gate, a group of men with shaved heads and matching outfits strode purposefully towards the main hall. Sure, they could have been a religious order, I guess- but I’d bet my bottom dollar they were a far-right group of some kind.

Most of Shinto has nothing to do with those buzzcutted ghouls inching towards World War III. For all its strange absences, Shinto is still an important part of life in Japan. It’s there in people’s lives, when they are born, when they come of age, when they pray for their ancestors. It lives alongside Buddhism and secular humanism, not fully competing with either. And despite my best efforts, I do not yet understand it.

2 That doesn’t mean that the two religions have always co-existed peacefully though- in the early 1870s, there was a period when Shinto was ascendant, and Buddhist priests were persecuted and removed from influential jobs.

3 An oversimplification, I know. Many people never ‘bought’ the propaganda either, and Japan was nothing like as totalitarian as the fascist regimes of Europe.

4 the summer festival of the dead. I have talked about Obon twice before: