(Credit for all camp photos goes to English Adventure’s fantastic photography team. Thanks so much for all these.)

I want to start with a vignette that sums up my week perfectly.

I’ve been kayaking three times in my life. The first time, I almost instantly capsized, briefly couldn’t get my legs out of the boat, panicked and spent the rest of the session gingerly paddling about in the shallows, frightened for my life. The other two times were this summer. So it’s fair to say that I’m not an expert.

But here I am, out on the lake, paddle at the wrong angle but still pelting across the water. A bunch of third-and-fourth-graders careen around at their own pace, without much directional control. And I’m the world’s least efficient boat rescue service*, gradually maneuvering into position to pick up kids who’ve fallen out of their boats.

And there’s this one kid who, well, the kayak isn’t his friend today. He’s stuck on the side of the lake and he’s rowing in the wrong direction. He keeps bumping into the banks, painstakingly turning his boat around and then paddling backwards into the same turf. Eventually, with some help and motivation, we get him out of this quandary, but on his way back he drifts towards another bank of the river, where a few aquatic plants are cluttering up the water and his boat is liable to get stuck. I head over to rescue him, and in my attempts to draw parallel, I smack into his boat, pushing it further into the vegetation. 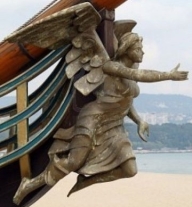 Eventually, we escape this comedy of errors, but now my camper has had enough of kayaking, so he jumps out of his boat. He swims for a while, but the lake is pretty big for a child and so he needs help again. Eventually, he clambers aboard my ship, and kneels at the very front, in front of my legs, smiling serenely. In this moment, he is exactly a figurehead, one of the carved figures that graced the stern of old ships, and pointed in the direction of the ship’s travel.

I’ve been out of my depth plenty this week, but on the whole, life is getting more manageable. This time, I worked with Team Skybird, a group of ten middles, who are in third or fourth grade (eight to ten years old). The difference in the shades is everything. Life is just easier when you have to repeat instructions twice, not forty times. You can reliably walk out of a room for five minutes and assume nobody will have eaten their water bottle or set fire to the curtains upon your return. Nobody is homesick, or at least everybody is embarassed to admit it in front of their friends. You can set up games and assume that the kids will make some effort to follow (and police) the rules.

The scope for activities expands, too. Kayaking of course, which was fun despite my limited ability. Our hike this time took us through a stunning stretch of woodland, dappled with komorebi- a lovely Japanese word for the light that filters through the tree canopy to reach the forest floor. Conifers grew on the slopes of the ridge we crossed over, and… aspens on its plateau? I don’t know my trees for shit, but Google is my hero and life partner. We played Camouflage (a kind of static hide-and-seek) on a low ridge. Then back through the rice farms, where flowers wrapped around the fringes of the fields and baby frogs were basking in the sun of their first summer.

So what do we lose in this trade-off? I think that the emotional connections I formed with the campers were weaker. The middles are more independent than the juniors, sure, but that cuts both ways. They don’t need you to do everything for them, sure, but they don’t necessarily need you to be their friend, either. Unlike the juniors, they certainly didn’t want me to dance with them at the dance party, which is entirely understandable but still cut me to the core. Err, I’m mostly joking, I think. I have a certain amount of goofiness in me, but I’m still struggling with the indignity of the dance party**. I’ve gone from superhero-servant to embarrassing uncle in a week’s space. 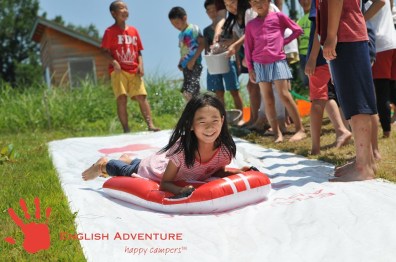 Some things don’t change, though. Everybody loves a waterslide, and if you let fourth-grade boys near a pool of stagnant water, they will still poke it with a stick. And just like last week, some of my favourite tender moments of the week were sitting around the campfire. We toasted marshmallows, and the boys broke their omerta to actually speak to the girls on our superteam. There’s something primal in fire that brings people together.

When Thomas Jefferson once suggested the American Constitution should be rewritten every generation, he pegged a single generation as nineteen years. These days, there aren’t too many 19 year olds married with children, but I like it as a metric for generations. The Baby Boomers were born between 1945 and 1964, a period of… 19 years. Generation X and the Millenials occupy similar time slots.

Why do I mention all this? Well, the kids I was working with this week are a neat generation younger than me. Their experience of growing up will be at least as different from mine as mine is from a boy born on the cusp of the seventies. At the dance party, Justin Bieber’s ‘Baby’ was playing in the mix (horrifying in its own right) when someone pointed out to me that most of our kids weren’t born when it was released in January 2010. I’m constantly floored by the passage of time, but that was something.

The Heat and the Return

The temperatures have been climbing all week, and even up in the mountains we’re hitting 32 degrees C with blazing sunshine. Keeping everyone hydrated is a daily fight, not least myself. I sweat and dehydrate my way through the day- I drank six litres of water and counting on Friday. Misplaced water bottles cease to be an inconvenience, and start to be a major problem. Summer is brilliant in the mountains, but I’m not built for this kind of heat.

At the time of writing, I’m back in Tokyo again, in a bizarre internet cafe with padded-floor computer pods, in the bland corporate environs of Akasaka-Mitsuke. Outside, the streets are empty on Sunday morning. I’m going to leave you with some pictures from my last trip to Tokyo, when I watched the Sumida Fireworks (from a distance) and watched the Yomiura Giants play the Hanshin Tigers in my first ever baseball game.

‘Till next Time,
From your correspondent on the Summer Camp frontlines. 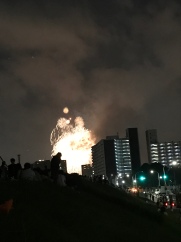 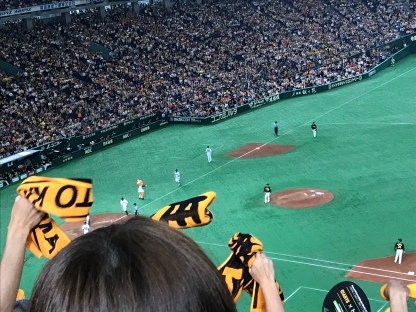 * Medal withdrawn pending doping allegations.
** To paraphrase Meatloaf, I’d do anything for summer camp, but I won’t do that.