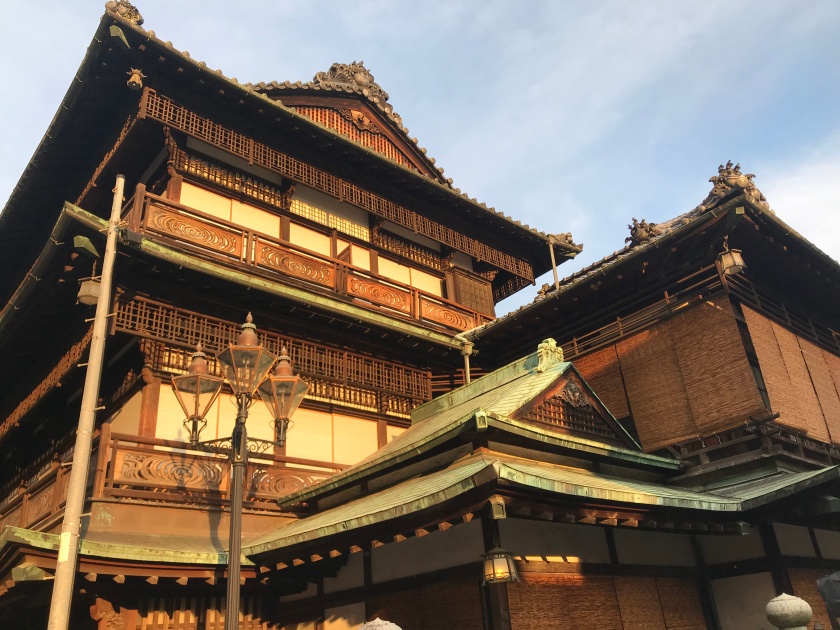 People travel to find themselves, don’t they? Well, I get the feeling I quite like being lost. I’m gearing up to travel before Japan before long, and I’m in a weird transitory phase at the moment. Having trouble focussing on anything, having trouble relaxing, having trouble kicking back and enjoying life as it is. I’m sure this too will pass.

Anyway, in my turmoil, having finished at NOVA, I thought I’d set sail across the sea to Shikoku. The smallest and by far the least travelled of Japan’s four islands, Shikoku is nonetheless a centre of Buddhist pilgrimage, and Matsuyama is its largest city.

Fresh from the seaport, I caught the bright orange local train into an indeterminate Matsuyama suburb. But then again, you’ve heard this tune before. After a certain number of pitstops, all Japanese suburbs are near-identical, with their FamilyMarts and their out-of-town restaurants, narrow streets, sculptured trees and prim gardens. This one was distinguished by what appeared to be a megachurch: an odd development in Shikoku, where Christianity never really caught on. But appearances can be deceiving, and this spired palace overlooking a train line is actually a venue for weddings. They’re all the rage at the moment- western-style weddings are in vogue.

My hotel was opposite the faux-cathedral, and even stranger. I got a room on the cheap, but I couldn’t honestly recommend the Fine Garden- the TV played twinkly new-age music and was difficult to turn off, and the shower room contained a diorama of Mickey Mouse knock-offs dressed as schoolchildren. Why? Why would anyone? Still, the room was colossal.

A quick wander through the town center revealed that the orange train wasn’t a one-off. Matsuyama grows oranges, and Matsuyama wants the world to know. Orange novelty cars, orange buses. Orange signposts. Even an orange football team. And of course, fresh orange juice on sale. I hopped aboard a tangerine tram and made for Dogo, the onsen district at the edge of town. 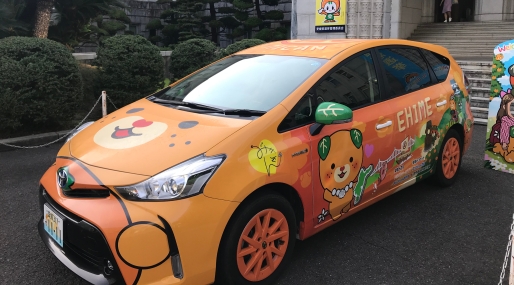 Dogo Onsen is a bathhouse without rival. The modern main building was built in 1894, when Japan was experimenting with limited democracy for the first time and warring with China. But the roots, as ever, are deeper, and in fact everybody from seventh-century Emperor Jomei to the author Soseki Natsume rested their tired bodies in the hot water under heron tiles. These days, the bathhouse comes with its own lightshow and glimmering animation, no doubt a nod to its inspirational role in the creation of Spirited Away (Sen to Chihiro in Japanese).

Inside, the floors are tatami mats and the lockers are wooden, with few concessions to the twenty-first century except the wristbands for keys. Only the first floor was open when I visited, but it was genuinely a remarkable place- a soft gray stone pool fed by a gushing bamboo pipe, with a delicately painted river scene on the tiles. I didn’t take any pictures, for obvious reasons, but it did get me thinking that this country gets something right which many western countries get way wrong- the idea of the naked body as inherently sexual and therefore taboo. In my opinion, Japan’s chilled attitude towards nudity seems way healthier. But that’s just me.

I got chatting to a Taiwanese dude who was apparently called Sting, and who was on holiday with his family. Sting worked in an investment bank in Taipei, but seemed far too nice for his profession. He’d studied in London, of course- they always find me, the ones who’ve lived in England. I always figured they recognised my clothing style, but apparently even naked, I’m unmistakably English. 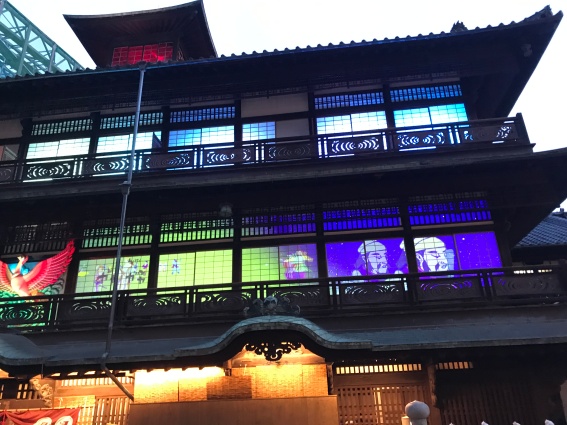 The next morning, two coffees down, I headed for Katsuyama* Castle, my second of Japan’s big twelve castles. When Kato Yoshiaki moved up the coast here from Iyo in 1602, there wasn’t much here but an onsen resort. But the big dog wanted to make a name for himself, and use the new lands he’d won by backing the right horse in the civil war. So he built a castle, and a town sprung up around it, helped along by a tax-free business zone (an idea which I genuinely didn’t know was four hundred years old). He then got shuffled out of the region in some power struggles, and replaced by another lord who gamely died without heirs. And so the wealthy and powerful Matsudairas ended up in charge of the castle. 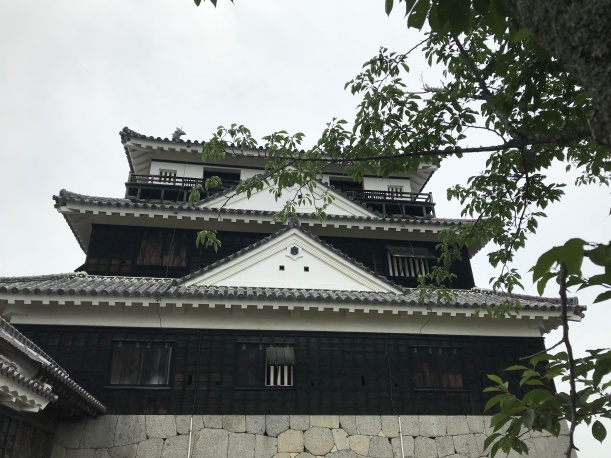 The castle itself is an odd one, and it exposes a weakness in my neat binary division of ‘original’ and ‘reconstructed’ castles. Matsuyama Castle isn’t entirely either. Its gigantic, virtually impenetrable stone walls were built in stages, from the 1600s to the 1850s. The main tower burnt down in 1784, and was itself rebuilt in stages before it was finished in the 1850s. But the Matsudaira lords never lived in the tower, and certainly never defended it. So is it an ‘original’ castle, or a reconstruction? Well, it’s both, I guess.

One thing’s clear, though. Despite the castle’s elaborate and complex defence system, with multiple gates, dead ends and turrets, this place was never attacked by invaders. Once you read a bit of the history- famines in the 1730s, Matsudaira Sadataka facing down rioters in 1741- you realise the awful truth. Namely, that places like this weren’t really built to defend against foreign invaders or rival lords. Instead, they were built to project power and strike fear into the hearts of ordinary people, keeping them docile. Katsuyama was an elite’s protection against its own great unwashed. I sat in the castle grounds, drinking ‘orange juice from a faucet’ (apparently a town specialty) and felt a quiet satisfaction that those old elites were washed away with the tides. 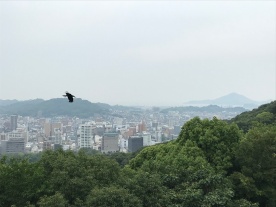 The actual administrative heart of the castle was further down the hill. Down here in the Ninomaru, or secondary bailey, the samurai watched traditional plays, the bean-counters managed the castle’s income, and the retainers whiled away their lives, always on military alert but rarely fighting. Nowadays, this area is a magical, meditative garden which instils a kind of deep calm. Dragonflies darted through the humid summer air as I sat and watched some fish cavort in the water. People should spend more time in gardens, I reckon. What am I, a life coach? Onward.

My favourite thing in the garden was this weird little curiosity called a suikinkutsu. Basically, an urn is buried underground. As water drips into it, the sound reverberates through a bamboo pipe. If you put your ear to the pipe, you can hear the music- and it is music, I’ve no doubt about that. I could waffle on for ages about the differences in culture that led European composers to make orderly, symmetrical symphonies while Japanese folk musicians honoured the quiet irregularities of nature, but I won’t. This strange instrument says it better than I ever could, anyway.

I departed for the Saka no Ue no Kumo museum. The building is spectacular- it was built by Ando Tadao, maybe Japan’s best modern architect and somebody who somehow makes concrete feel warm and alive. However, the museum brutally exposed the limits of my kanji reading. I heroically struggled against the tide of half-familiar symbols, but it was hopeless- I got fragments, helped by a very patient museum attendant who explained the Russo-Japanese War to me (I’m still not quite sure why). In the end I left without much clue of why I was supposed to care about the life of Masaoka Shiki. The museum is in the grounds of a Franco-Japanese chateau which apparently had banging parties in the twenties. Only ninety years too late.

The rest of the day was a familiar haze. Egg udon- excellent. Shrines- radiant in the late afternoon sun. Steps- too fucking many. Again, there’s only so many times. In the evening, back at my guest house, I met Shunji, a wanderer with a motorbike looking for the right city to call home. We sat up and chatted about home, and Japan, and work and life and how to live it. He seemed like an interesting character, and I wished I could’ve stayed longer.

For now, with a Glass of Orange from a Faucet,
From your correspondent in the archipelago. 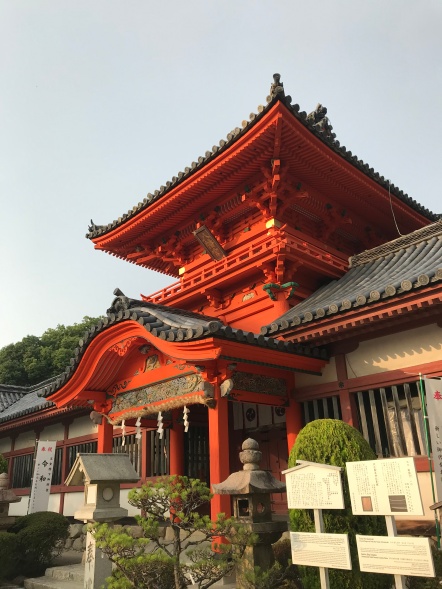