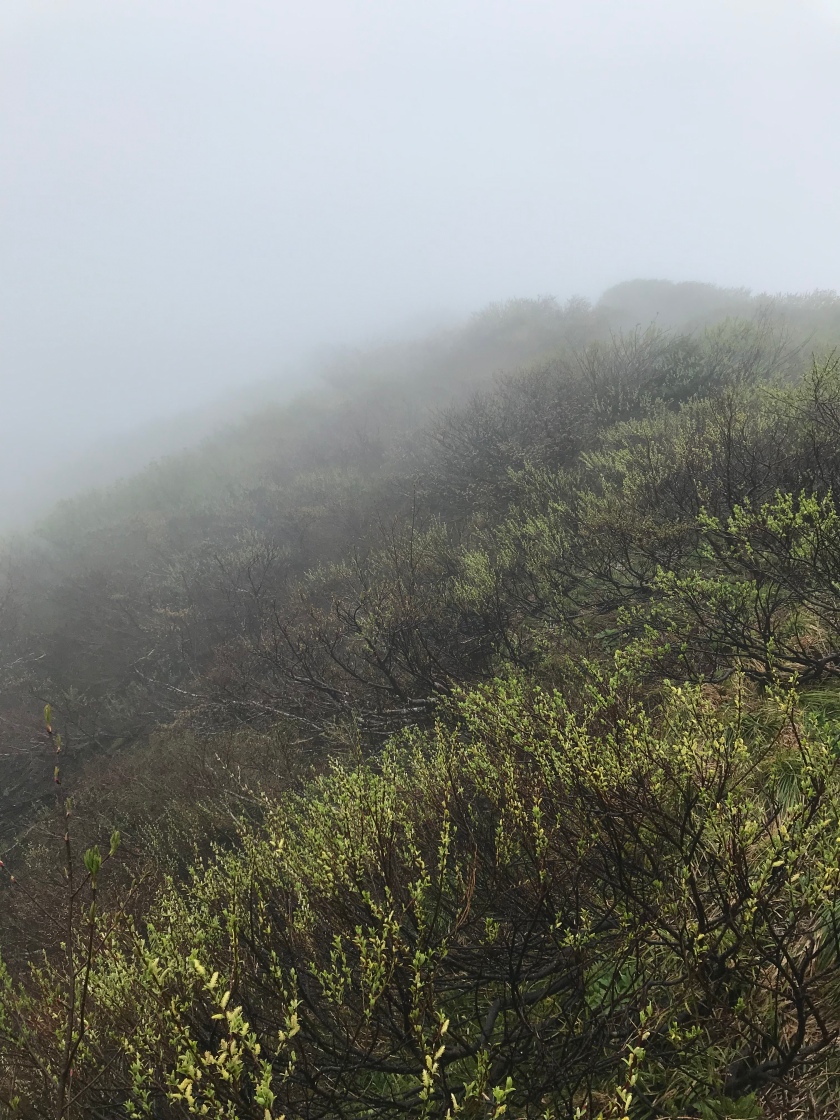 May 21, 2019 The Worlds Outside japan, nature, travel One comment

Listen, I’m not saying the ancients were right about Daisen. Despite all the age-old warnings, I doubt that Kagutsuchi, Shinto god of fire, himself dwells on the slopes of the mountain, or that would-be hikers need a yamabushi (syncretic1 mountain priest) for protection. But maybe it would have been a good idea to check the weather forecast first.

The taxi driver gave us fair enough warning. Ferrying me and my teacher buddy Harry over from Yonago, the sort of town that always gets described as ‘sleepy’ by writers with a deadline, he was taken aback by our intentions. ‘Tozan2?’ he asked incredulously. Then once more, just to make sure we’d understood, ‘yama noboru3?’ He asked if we were interested in visiting the famous local temple, or the town’s well-loved hot springs. We weren’t; he shook his head. Finally, he dropped us off at the bottom of an unprepossessing stone trail by a dam. Bloody mental tourists. Whatcha gonna do?

Daisen’s summit is over 1700 metres high, towering over flat plains which stretch down to the sea. It might be the second most famous peak in the country after Fuji (I reckon lots of mountains claim this title though). At the base of the mountain, conifers mingle with pale beech trees, and there are some austere, plain wooden temples, like Amida-do, which was built in 1552 and has survived war and storm, unvarnished and somehow unburnt. But I refuse to spend any longer talking about temples. We’ve done this skit.

As we walked, we marvelled at our own athleticism. 900 metres already! We hadn’t climbed nine hundred metres, of course- we’d started at seven hundred and walked up a few prim, well-kept steps and a neat little trail. We believed what we wanted to. Such is the simplicity of man. Still, 1,000 metres came and went quickly enough. At this height, the conifers don’t grow any more, and you can peer through the beech forest at the open plain below. All the while the winds kept building and subsiding, rustling through the trees. A delirious sign warned us not to drop rocks- who are all these people, hurling rocks off the mountainside and getting signs put up, anyway? Dickheads, as Harry would put it. 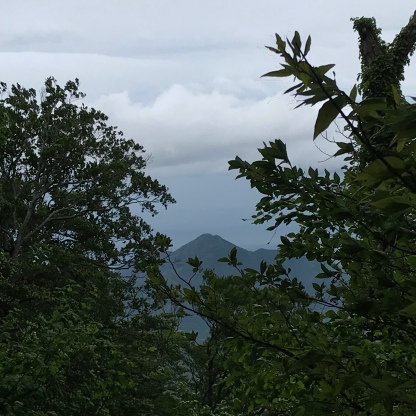 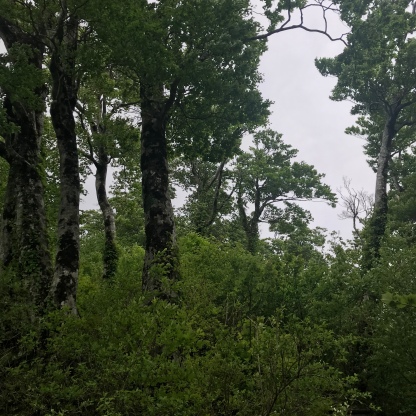 After a while, we started to notice something. Just a twinge in the lungs, at first. ‘This path… it’s all up, isn’t it? No horizontal stretches to balance it out’. What started in the lungs quickly spread to the knees, and soon we were struggling.  A few people crossed our path, looking weathered. A woman warned us about the dangerous wind at the peak. By this time I was really struggling- for all that Daisen is marked out with a nice, neat, well-defined little path, it can be a surprisingly relentless climb, especially with the wind tearing into you with growing velocity. By the time we passed the fifth station and two more climbers warned us about the ‘gusty’ conditions ahead, I was getting more than a little psyched out.

Sometime between the fifth and sixth stations, we crossed above the tree line,but I didn’t really notice. I was too busy swearing at my stupid fucking shoes and also the mountain for stubbornly refusing to ever be flat. At the sixth station, disembodied laughter came from the world’s creepiest shelter, complete with unexplained red stain and foggy shrubland backdrop. I fully believe if we’d opened that door, there would’ve been nobody inside. By this time, we were entering into the clouds.

After that, the path got tougher- the plants around us were too small to offer much protection, so we were buffeted by the rising wind, regularly ducking down to avoid strong squalls. Although some sections had neat little steps, others were made up of piles of loose stones. The map had promised the mountain would level out sooner or later, but the moment never came. Meanwhile, the temperature had dropped, and the cloudspray hit us like tiny ice missiles. A couple of times, I collapsed onto a ledge and Harry had to cajole me into getting up again. We didn’t say much to each other besides shouting obscenities every minute or so. 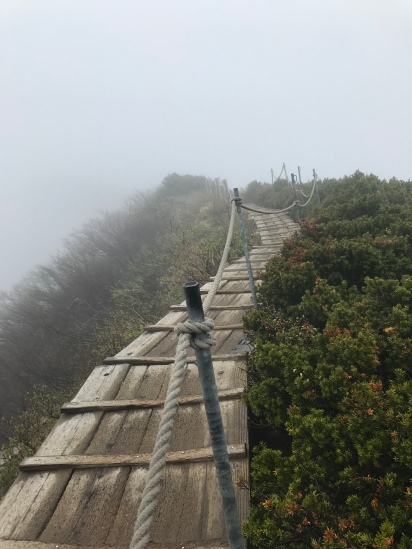 And then, just after the eighth station, we clambered onto the boardwalk- a wooden walkway built across the grasses on the uppermost slopes of the mountain. Finally, we were fully out in the open. When I saw pictures of the boardwalk before I came, it struck me as an example of Japan overtaming and Disneyfying nature, making sacred landscapes into neat little opportunities for selfies. Well, firstly, it turns out it’s a guard against environmental degradation, and secondly: Thank. Fuck. It. Was. There. We clung on to the rope and inched forwards, me hunched over, Harry crawling at first, as the wind tried its best to fling us off the mountain. You could barely see more than a few metres though the barrelling cloudscape.

Just before the peak, we stumbled into the summit shelter, fingers numb with cold. I couldn’t tie my shoelaces properly. And then the rains started to fall, pelting against the window. Wearily, we hiked the last few metres, and took an obligatory picture, my phone shaking in my hand throughout. I looked over the edge and was nearly blown away. Not by the view, mind, we couldn’t see a goddamn thing.

The descent felt painless by comparison, although the rocks only got more slippery, and we both had a few near misses with fate in the guise of twisted ankles. Back in Yonago, we toasted our idiotic planning with yakiniku and beer, and in the morning we went and checked out the almost abandoned beach resort. I felt a powerful attraction to Yonago’s quiet, flowery beaches- I feel like I’m supposed to come back here some day. When the wind blows me back.

1  the yamabushi were a unique aspect of medieval and early modern Japanese religion. Practising an unorthodox mix of Buddhism, Shintoism and local beliefs called Shugendō, they would disappear into the mountains to purify themselves, communicate with spirits and gain shaman-like powers. As such, they were the perfect guides for people on pilgrimage. They also often worked with priestesses called miko, who entered trance-like states to convey messages from the spirit world.