Apr 8, 2019 The Worlds Outside culture and society, japan, politics One comment

Campaigners drive around in cars with megaphones on the roofs, waving at people and blaring messages. Around the city, there are neat, respectful lines of posters up advertising the candidates. The elections are for the city council, and they won’t bring down any government, but they’re still the kind of thing that an election otaku like me ought to find something to say about.

I’ve really tried to write an article about Japanese politics. There are interesting issues, of course. Politicians and lay folks clash over the US military base in Okinawa; some (including students of mine) argue that the base creates economic benefits and that moving it would be too disruptive to Okinawa, while others argue that the base constitutes an unacceptable loss of sovereignty. In the background of this debate, relations between the US military and local people are an open wound- there have been some horrifying cases of sexual assault committed by soldiers, and the governor of Okinawa wants all troops to leave.

Arguments about scrapping Japan’s nuclear network have also surfaced in the wake of Fukushima. Nuclear power plants basically shut down after Fukushima, but they mostly weren’t decommissioned, and some of them are groaning and creaking back to life. Here above all, you often see anti-nuclear campaigners, telling stories of past tragedies and gathering signatures. Meanwhile, Japan has the world’s most unwieldy public debt, with the government owing more than twice the country’s entire GDP1.

But at the core of it all is a vacuum. Japan is nearly a one-party state- the socially conservative Liberal Democratic Party (LDP) have been in charge virtually uninterrupted since the fifties. Most of the senior politicians are second, or third, generation elites, inheriting seats and votes from their fathers. Politics is conducted behind closed doors by groups of alternating factions within the party. Each faction is generally managed by a leader who has cultivated loyalties inside the party; people have described this as ‘personality politics’, but I struggle to see the personalities. Few of the politicians are charismatic, and barely half the population (53%) could see any point in voting at the last election.

Then there’s a party with deep Buddhist roots, the Kōmeitō. They tend to be pacifist and in favour of welfare programmes, so I guess they’re not all bad, but they do seem a bit culty. They exist in an awkward alliance with the LDP, and they do have some power, but they’re very much the Robin to a conservative nationalist Batman. Man, I hope they ask me to do the next Batman reboot; it’d all be about district elections in Sendai and it’d single-handedly bankrupt three Hollywood studios.  Although the Kōmeitō is male-dominated in parliament, a lot of the policies are created by married women’s organisations (fujinbu), a system I’ve never heard of in any other political party in the world. There are Communists in the Diet too, amazingly, but they’re a shadow of their former selves.

The rest of the Diet2 is made up of a constellation of parties that shuffle in and out of existence without a trace, like quantum particles. To try and follow it is to descend into the dullest form of madness. To give you a tiny taste, in 2016 the DPJ merged with the Japan Innovation Party to form the Democratic Party. One year on, the party dissolved; some of their members split to join the Kibo no Tō (Party of Hope), and then some of the others formed a new party called the CDPJ. In 2018, Kibo no Tō then merged with… I mean, are you bored yet? I am. I’ve lived in Japan for nine months, and I just had to look up the name of the Leader of the Opposition3. And… well, he seems like a stiff and uninspiring speaker. His posture resembles a man whose limbs have been glued together, and who’s trying to work out how to get himself free without alerting attention.

If you’re a person who wants change in Japan, it seems like you turn to activism, not to the Diet, for answers. A friend who’s been staying with me works with activist groups including the hibakusha (atomic bomb survivors) and those seeking a frank discussion of Japan’s war crimes. However, that comes with its own challenges. Talking about politics with strangers is uncomfortable for a lot of people, but in Japan it’s particularly unstable ground. Too often, people don’t like to talk politics, and so activists struggle to get their voices heard.

Others turn to the far right- the Uyoku dantai (right-wing opposition groups) which may have as many as 100,000 members. These guys often drive around in black vans festooned with flags and painted with eagles, blaring out aggressive messages at an unsociable volume, calling for the return of mostly uninhabited islands from governments who aren’t listening, or else.  The shadow-form of one of those cuddly election mobiles. I saw one in Osaka, and with no understanding of Japanese managed to guess their ideology on sight. On a related note, why are people who are obsessed with eagles so often dicks?

The Uyoku dantai overlap with the yakuza a fair bit, sharing their fondness for tattoos, and some (but not all) of the leaders are also yakuza. This video gives a broad sense of what their ideas and priorities are4:

I’m struck by the overwhelming maleness of these quasi-military organisations. Like a lot of far-right groups, they’re both frightening and faintly ridiculous at the same time. But even though my neighbourhood of Takaramachi is apparently home to more than a few yakuza, I’m only aware of the far-right groups because of the occasional passing van, or a small, bedraggled group of men holding banners outside a provincial train station. They’re scary people, but not that scary.

Recently, I’ve been following politics, mouth agape. Not here, but 9,400km away, where the id of the British political system has got out of its car in a traffic jam, pulled down its pants and is standing on the car roof, legs akimbo, covered in jam and yelling dark sexual taunts at seagulls. The whole thing is completely mesmerizing. I wrote a long article about Brexit, which I lost due to some inexplicable computer malfunction. The psychosexual collapse of the Conservative Party is something that should never be witnessed by anyone, but I can’t look away.

The difference couldn’t be starker, and watching Britain from afar is a surreal experience. I’ve moved house four times and cities twice since this whole thing started. When David Cameron stood up at his ‘silly little podium’ and announced a referendum, I was back in the home country of Saint Albans. I’m embarrassed to say I was bored by the whole thing at first, and I was sceptical about the EU as an organization. It contributed greatly to Greece’s misery, didn’t respond well to a surge in refugee numbers and generally seemed pretty ineffective. All the same, I guess I knew where my heart lay. In the broadest sense, I believe in a world with fewer walls and more connections, and Brexit wasn’t a route to that world.

I arrived in Bristol just as an intense naval battle was being fought by rival Brexit flotillas on the Thames. Ever the stuntman, our Nigel- well, it was either that or become a politician, I guess. Leave the arguments to people who aren’t fresh from the Rose and Crown, four beers down on a Saturday afternoon. It’s our right to hunt fish to extinction to grab marginal votes in Great Yarmouth! At the time, that was as surreal as Brexit got. Remember those days?

The referendum itself happened during my first week of a new job, and I came into the office to absolute panic. People shouting, slumped at their desks, sending agitated emails about the collapse of the union. It was all very odd. During the Brexit phoney war, I campaigned for the Green Party in Bristol, and the EU wasn’t even the number one topic of conversation. People on the doorstep wanted to talk about the NHS and schools and Bristol’s traffic problems.

And I arrived in Hiroshima in July 2018, just as Boris Johnson stormed out of the cabinet ‘on principle’. There aren’t inverted commas all-encompassing enough to contain Boris’s principles. Since then it’s been one long sled ride into batshittery, downhill all the way. Cabinet ministers resigning to protest the deals they negotiated. Votes on holding votes on holding votes.

One way or another, I reckon our current two-party system isn’t going to outlast this danse macabre. In fact, it already kind of hasn’t. On the Labour side, I’ll eat my beret if some more comrades don’t jump ship to Change UK or one of these death-by-focus-group new political parties. Whatever you think of Corbyn in general, he hasn’t exactly covered himself in glory throughout this process, swearing he’ll call for a second referendum as a last resort while clearly planning nothing of the sort. Meanwhile, the Conservative Party is only duct-taped together for show. The European Research Group and now One Nation are parties within a party, and there could easily be more. Bits are falling off it. Maybe it can survive this5 still, but I wouldn’t count on it.

Every aspect of this clusterfuck is utterly unlike Japan. Here, inertia rules the day, while back across the sea the whole political order changes on an hourly basis. In the Diet, politics is mostly polite, decorous and unenthusiastic, while Cabinet meetings in the motherland resemble ‘the last days of Rome’.

Across Japan the Prime Minister is quietly supported (if not particularly loved) by a silent majority of Japanese voters, at least the ones who make it to the polls; in the UK, Theresa May clings on, day by day, rolling that boulder up the hill just one more time.

I don’t think the Japanese political system is very effective, or even very democratic, and I’m not likely to start singing its praises. But it’s been an absolute blessing to be here, nine thousand plus kilometres away, watching from afar.

‘Till next time,
From Your Correspondent in Hiroshima 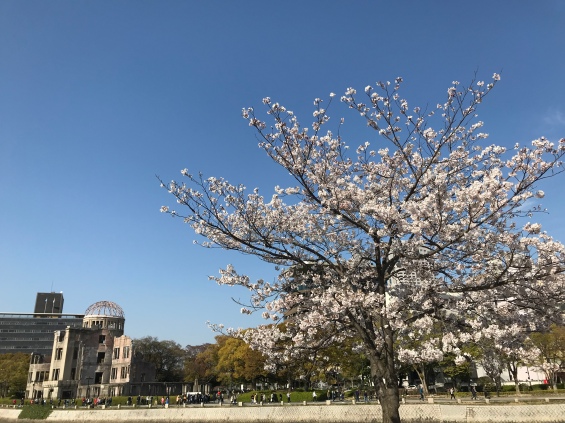 4 Yet again, Vice doing some pretty good journalism. Let these people be themselves and catch it on film.