Feb 1, 2019 The Worlds Outside culture and society, japan 2 comments

‘Evening. What’s new with me, you ask? Well, I’ve actually been keeping one of my new year’s resolutions! I decided to get more active, and to that end I’ve started swimming at Hiroshima Central Pool, and am going bouldering once a week with my buddy from work, Brett. He’s a seasoned climber, so he’s giving me tips. The climbing centre is great, although for some people, gravity is just a minor inconvenience. Spot the difference*:

To my chagrin, I’m forced to admit that doing more exercise does make me happier. I’ve been working on taking some more interesting photographs, too, and later in February I’m heading for Shimane Prefecture, to see the birthplace of Japanese civilization. And then in April, I’m visiting Tokyo for the first time!

When the British Catholic reformer Thomas More wrote Utopia in 1516, he coined a word we still use today. He imagined a world that in many ways foreshadowed the radical socialist vision: shared fruits of labour, free education and medical care, people moving between houses every ten years, zero unemployment. He was even daring enough to imagine that his world might have religious tolerance, although it had little time for atheists*. The telling detail of the book is its title: the word utopia literally means ‘No Place’, and More certainly knew his ‘perfect society’ was an fantasy, a philosophical daydream.

As there, so here. I was thinking about that recurrent question I struggled with when I was home- ‘what was the thing which surprised you most about Japan?’ I started writing an article to answer it, but it was full of trite, unoriginal bollocks about silent crowds and people not eating in the streets. It wasn’t an honest answer, and what’s the point in that?

But there is one big thing which surprised me about Japan, and it was so huge and unexpected that I only became dimly aware of it, step by step, over time. It finally snapped into focus when I was talking to my buddy on my way to Yokogawa station. As per Brett:

‘Japan got stuck in the 1990s.’ We were talking about the surprisingly barebone design of company websites, but he had a bigger idea in his sights. The thing is, in the eyes of the world, Japan is a tech utopia, full of robots and supercomputers, forever ten years ahead. But anime tropes aside, I’m not sure there’s actually much evidence for this vision of Japan. My experience has been the opposite, of a society that’s cautious about new technology, worries a lot about the impact of new technologies, and is slower than many to embrace automation. I don’t know if this is a good thing or a bad thing. But having lived in a big city for seven months, I’m pretty sure… it’s a thing.

So first things first, I should mention the ways in which the cyberdream is real. It’s true that Japan invented androids, and is still a leading light in robotics research. Everybody has an up-to-date phone: my old boss once told me that he sold his iPhone 4 as ‘vintage’ to a Japanese buyer. The Shinkansen is as good as its reputation- lightning speed and comfortable at that, if a little pricey.

Then there are the little luxuries of life. For example, my ICOCA card, which I charge and swipe to pay for train journeys, can be used on some vending machines. Many people who come to Japan have had fun ordering their ramen by pressing buttons and getting a little ticket printed. 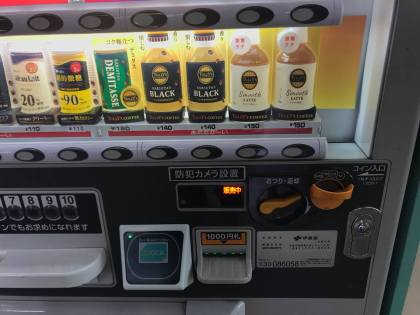 But you don’t see much hi-tech in daily life. For example, Japan is basically a cash society. Outside the big city centre chain stores and the 7/11s, most places won’t accept card payments, and so you should have some folding cash on you at all times. Outside the city, don’t even think about it. CDs and DVDs are still a huge market, because the Japanese government tends to dislike and restrict the growth of streaming services.

Although internet speeds are very fast, getting the internet installed in your apartment can take over a month. When I was told this, I decided I couldn’t be bothered, and now I run my internet service off my phone. Wi-fi hotspots are becoming a bit more common, but it’s a little surprising that the big chain café in my local area doesn’t have one.

And the web design! Oh lord, the web design. I probably shouldn’t share a picture of our retro work intranet, but here’s the Shinsei Bank login homepage, which… erm, let’s just say the last twenty years have passed them by. They are a huge banking conglomerate, and they’re not alone. I read that even big tech companies sometimes soldier on with email systems from twenty years ago.

And then there’s the truly baffling. Recently I was asked to fax some documents. Now, I’ve never actually used a fax machine before, because I was born after The Simpsons first aired and a month before Nirvana released Nevermind. I have had no need of a fax machine, and neither should my office. And while I can understand the loathing of online form submission systems, the amount of paperwork you see piled up in offices can’t be efficient. NOVA is actually good on this front, because of a ruthless filing regime, but I’ve seen offices stacked high with tens of thousands of administrative documents. There’s an easier way.

Perhaps you’re starting to form some explanations for this odd situation. Well, I reckon fear of automation must be a big part of it. In a country that still pays traffic wardens to wave flags and direct cars and pedestrians, nobody wants computers to take people’s jobs. That’s why there are no self-checkout stations in Japanese supermarkets (which are usually overstaffed, to be honest). I can see a lot to admire in this attitude, to be fair. Maybe the UK had an easier time adopting new technologies because it gutted its unions and made a lot of people unemployed.

There’s a nice human element to this tech-wariness, too. I have to admit, it’s pretty nice to see familiar faces at the local shop, make some small talk and share a smile. It’s cool seeing people pressing noodles with ancient metal presses, or ushering you to pass in front of a waiting car. I can understand that Japanese society works pretty well in a lot of ways, and people fear upsetting the balance.

Nonetheless, I think it’s odd that a country with a falling population is so slow to adopt labour-saving devices. There’s a reason why Canada is becoming a cashless society- basically, it’s easier. And the poor web design and clunky technologies are a mystery to me.

Why does this mythical, futuristic Japan persist in people’s imaginations? Well, the androids really are impressive, and Japan has a glut of researchers and developers in engineering and technology. Some of it is a hangover from the 1980s, when Japan really was ahead of the curve. But if I had to isolate one reason, I’d guess it’s because of the Japanese culture that is most dominant in the wider world: anime and videogames. Anime is filled with flying robots and supercomputers and spaceships; and sure, most people know that anime shows aren’t documentaries, but I still think the association is made in people’s minds. Japan obviously produces fantastic, innovative games, and they also nod to futuristic fantasies.

Once again I’ve written about five hundred words more than I meant to, so I’ll cut things short here- but I might return to the theme of Japan’s tech image in the future.

Till then, with one eye on the future,
From your correspondent in Hiroshima.

* Pictures of me courtesy of Brett.