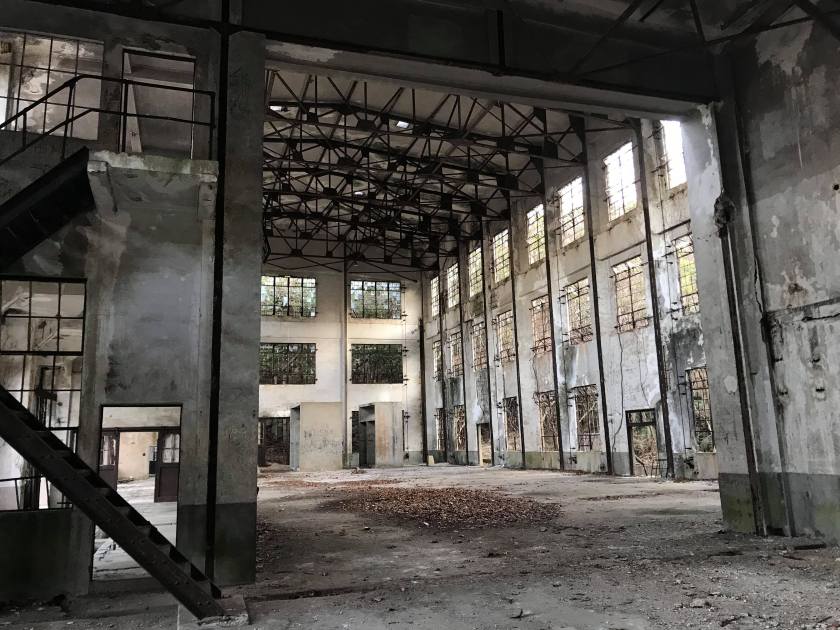 Jan 21, 2019 The Worlds Outside history, japan, travel One comment

Was that a good week or a terrible one? I think it was a good one, even if it did start with me missing my shift, dashing manically to work, buying some ill-fitting shoes and then getting fined for my sins. True story. Along the way, it took in my first Shinnenkai (Japanese party to celebrate the nascent year), where I tried horse sashimi with fiery wasabi and soy sauce. On Wednesday, I talked hip hop and Paul Simon with a colleague from Okayama and the owner of our favourite bar, and on Sunday, I went bouldering, an activity I’m determined to master one of these days. 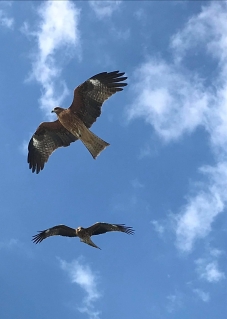 I get in these terrible black moods sometimes, which I can’t really explain. On these sullen foggy days nothing is the cause of celebration, and I find it difficult to see the extraordinary. There’s been part of me sunk in the fog since early December, I think. But sometime this week, the skies cleared, and I could see why I was here again.

So without further ado, I present to you the story of the island of Ōkunoshima, home to an abandoned poison gas factory which was secretly dismantled by American troops and hidden from the public for forty years, and also to some cuddly bunny rabbits.

Another day, another strange, half-deserted little town, shuttered and closed for business at lunch time on a Friday. I was only passing through Mihara, but I remain puzzled by the economic logic of towns like these, and perhaps there isn’t one. I can’t see how all these small businesses can function, when they’re closed most of the time, and for a medium-sized community (about 70,000 people, once you strip out the satellite towns), the centre was a ghost town. I always feel a bit unnerved by empty towns. You know what I mean? It’s like any moment, you’re gonna see a robot periscope or alien antenna probing around the corner. I bet young folks in Mihara are itching to get out.

Anyway, after killing an hour and trying some weird ink-coloured soba, I caught the local train to Tadanoumi, and then boarded a ferry. A man threw snacks to birds following the ferry, and they swooped and caught them in mid-air, which was awesome to watch and gave me some candid camera seagulls into the bargain. Twenty minutes later, I was standing on the shore, in the freezing January afternoon sunshine, watching rabbits shuffling about and sniffing the sandy soil.

Like much of Hiroshima’s coastline, the island was important to the military. Before the Russo-Japanese war, starting in 1902 a huge fortress was built to the north of the tiny* island, from which missiles could be fired at invading ships. You can still walk around ruins of the fortress, although the searchlight tower used to scan the seas for invaders was strictly out of bounds.

And then, as Japan’s interwar democracy started to crumble, the island was chosen as the site for a secret facility to make poison gas. On the day the factory opened in 1929, Japan’s military elites alighted at this nearby pier for inspections, but soon afterwards they stopped using it without explanation, in favour of a second, less convenient pier. Most likely, they didn’t want to be seen coming or going. The island itself was literally removed from maps.

I am loathe to admit it, but the factory itself was enchantingly creepy. I’m not drawn to the darkness in the way some people are, but it was weird to stand in the entrance of this lost monument to the atrocities of war, and realise that it, too, was just a workplace for a lot of people. To be honest, I shouldn’t have been inside at all, rather a good couple of metres back- I accidentally on purpose took a side path which led me astray. The factory was only active for sixteen years, but in that time it produced a range of poison gases for the military, including cyanic acid, phosgen and the deeply unpleasant ipelit.

But to see the building itself as the factory would be a mistake. The whole island was one connected factory, with huge, crumbling storehouses on the west coast. A huge and visually striking arch still stands marking the entrance of the storehouses; daffodils bloomed in its midst. It loomed over me like the crumbling relic of some fallen civilization. Look on my works, ye mighty, and despair, and all that. Smaller storerooms were dotted about. Further south, the inspection building from some Half Life world of post-apocalyptic concrete lay abandoned and overgrown.

Making poison gas isn’t a cushy job at the best of times, and these certainly weren’t the best of times. Workers’ apparatus included rubber boots and gloves, full body suits and gas masks, but there were many accidents, and over the years poison gas seeped through uniforms and caused serious health problems, like conjunctivitis, bronchitis and pneumonia. Many people were seriously burned by gas, or died early due to complications. In China and elsewhere in Asia, thousands of people suffered and died because of these hideous weapons.

The American army oversaw the systematic dismantling of the factory in 1946, and after that nobody spoke about the factory’s use for nearly forty years. Records were destroyed, so nobody can trace where they were used for sure, although it seems very likely that they were used in chemical warfare in Hebei and Zhejiang Provinces, China (the museum is predictably vague about this). We don’t know why the Americans decided to hush up the existence of the factory. We don’t know how many people on the nearby mainland guessed the truth about this ‘secret island’, where military ships docked under cover of darkness.

On a lighter note, we also don’t know why the island has so many damn adorable rabbits. They weren’t there during the war. A working theory is that a few rabbits were brought by school children in the early seventies, although why they were on this island with several rabbits is anybody’s guess. To me, the rabbits symbolize the regenerative power of nature, but they’re also just a cute counterpoint to this place’s shadowy history. I promise that next time I write, I’ll give you happier fare, but in the meantime, please enjoy some pictures of rabbits. 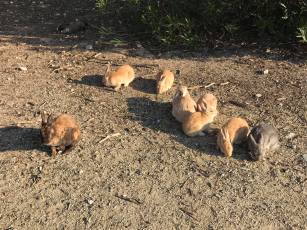 * It’s only about 4km in circumference. An elderly jogger lapped me twice while I was exploring.