Hi everyone. For the first time since my first post in June, I’m writing to you beneath the darkening skies of Hertfordshire. It’s been great to catch up with people, and while St. Albans hasn’t changed too much, it’s also been cool to re-engage with the homeland and absorb the atmospherics of British wintertime. The pubs and the food have been ace, too.

The best laid plans being ever doomed to fail, I spent the last week of my autumn term in bed, sick, with a suddenly and mysteriously broken laptop. As a result, I never wrote my final planned post, and it’s been a while since I’ve posted an update.

Anyway, I don’t want to keep you long today- this is a quick update to say Merry Christmas and a Happy New Year, and explain where we go from here.

So far, the blog has mostly been read by my friends and family. I really appreciate all of you who take the time to read, but I’d also like to have a bit of a wider reach. So I’ll be working on ways to get the message out, and to write with an audience who doesn’t know me personally in mind, as well. If you enjoy reading, it’d be great if you could share with anyone in your circle who has an interest in Japan or travelling.

I’ll still plan to post something every week, but I may post something short and sweet while working on more in-depth researched pieces: interviews, reviews and the like. Please get in touch if there’s some aspect of Japanese life or my experience you’re interested to learn more about. I can’t promise to incorporate all ideas, but I’ll do my best.

Among my new year’s resolutions for 2019 are a promise to double my efforts to learn Japanese, and take up one ‘traditional art’ like calligraphy or pottery. I’ll be writing about my efforts to learn the language, and about the odd status of religion in Japan.

I don’t have a lot of future plans right now, but I should be off to Tokyo sometime in April, to catch up with an old friend and witness the world’s biggest city for the first time. I’m also going to visit Shimane Prefecture to the north, to see the ancient roots of Japanese culture in Izumo, and investigate a medieval silver mine. At some point, I’m also hoping to climb a mountain*, catch a baseball game, take part in a tea ceremony, and finally locate the Hiroshima music scene, if it draws breath still. We’ll see what happens.

Peace out, and have a good New Year. I’ll leave you with some moody snapshots of home. 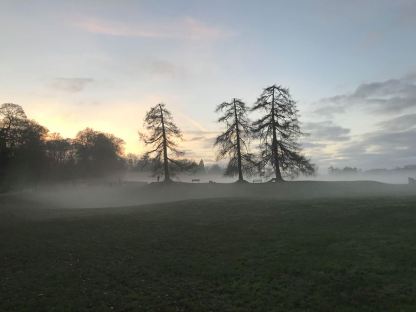