Nov 24, 2018 The Worlds Outside culture and society, japan One comment

So, I’m already back from Fukuoka, and I’m itching to write about Sumo- but I had a half-written blog article to finish. So, today’s offering is about beauty and ugliness, and how the two intertwine in modern Japan. 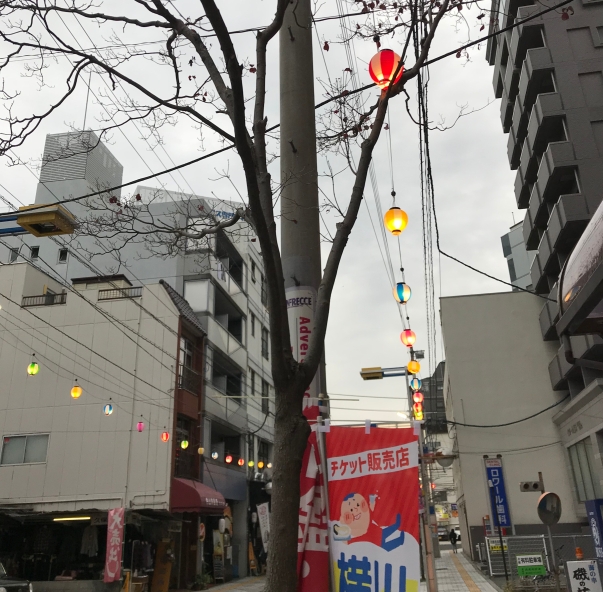 All the world’s a festival.

The city has been celebrating Ebisu, one of the Seven Kami of Fortune (shichifukujin) which are, loosely speaking, deities in Shintō*. Ebisu is a figure from the deepest spring of Japanese mythology. Born without bones, he was called Leech Child, and was abandoned in a flimsy boat by the creator gods Izanagi and Izanami. He washed up on a remote island and was cared for by non-Japanese peoples of unknown pedigree, possibly the Ainu. He grew up to become a portly, cheerful demigod, carrying a fishing rod and a red fish everywhere.

Ebisu is associated with whales and other large fish that wash up unexpectedly- a boon for medieval poverty-stricken coastal towns. He also offers good fortune to his followers and healthy trawls for fishermen. The specific kind of good fortune Ebisu smiles on involves adventuring, and risk. Perhaps because of this, since at least the twelfth century Ebisu has been a patron deity for market traders. During the festival Shinto priests offer blessings to small businessmen, and the various businesses of the area are cajoled into buying good luck charms consisting of rakes covered in colourful paper and small fabric barrels. Go figure. Apparently lots of the businesses don’t care about the Ebisu festival, but this is Japan, and you ignore a trend at your peril.

On Sunday 18th, Chūō-dōri, one of Hiroshima’s main streets, was closed for a street market. Hundreds of food stalls offered dumplings, yakitori and crepes-on-a-skewer, a surprisingly good snack albeit not my finest hour in food photography. Business owners queued up for a blessing. Although I enjoyed the food, I was feeling the after effects of a night at the izakaya; I was grouchy and not in the mood to crane my neck at the entertainment, so I left early. 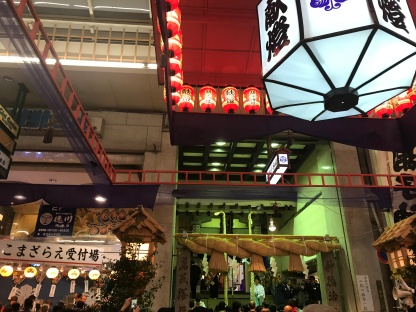 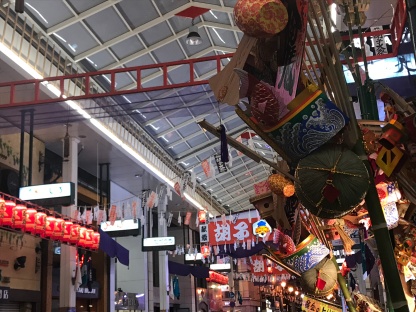 Fortunately, I stumbled across a different part of the festivities at a shrine near Yokogawa station, the very next day. A tiny strip of suburbia along the river was transformed by lanterns, paper flowers and calligraphy into a stage fit for a Shintō festival dance. The lines between religion and theatre are always thin, but in Shintō they disappear altogether; performance is worship, and worship is performance. The dance style is known as kagura.

I watched two performances: in the first, a whirling dervish of a samurai spins round and round, until he encounters a noblewoman who turns into a lion demon. The two spar, until the lion demon is finally vanquished by a hammer blow. The transformation happens stage by stage- first, a trickle of blood down the courtesan’s face, then the appearance of the lion’s face, and finally the smoke-and-thunder costume change to a full-on fursuit. Somewhere, in the murky underbelly of the internet, I bet there’s a kagura erotica forum**. The second dance featured Ebisu himself, done up in vermillion and carrying a fan and a fishing rod. He frolicked around, a picture of contentment, and with strenuous effort caught a fish through the curtain at the back of the stage.

Surrounded by painted lanterns and flowers like bonsai fireworks, the beauty of the whole thing was remarkable. Japan is a country in love with aesthetics, full of craftsmen, ingenious designs, arcane characters and sacred patterns.

And yet. And yet.

Photography is the art of lying by omission. I post picture after picture of rapturously beautiful Japan, but the truth is that eighty percent of Hiroshima looks like this: 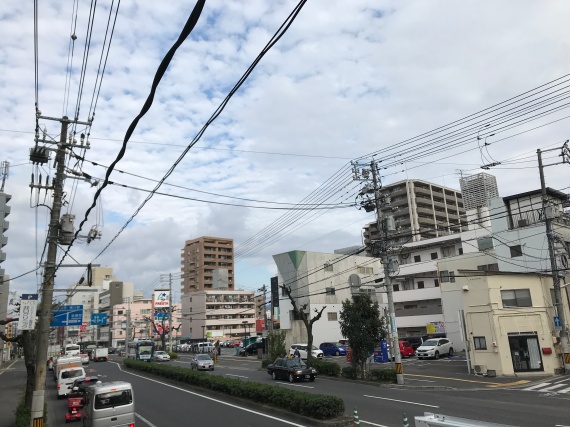 Mediocre apartment buildings abound, covered in cheap plastic or cladding that would embarrass Beverley Moss***. Electric cables are tangled around lampposts in careless jumbles. Colours are thrown together at random, and signs are rarely designed with any thought to the building they are perched on. Untreated concrete walls are left to gather pollution. Even this unsightliness is a blessing compared to the weird obsession with minimalist greyness which stems from zen gardens and the pursuit of mu (nothingness). Any city has its ugly spots, and without ugliness, beauty is meaningless, but Japanese cities do seem to have more than their fair share. 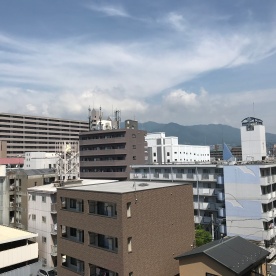 There are islands of hidden beauty, of course. Perhaps more important is the sheer excitement of city life. Cities can get away with not being physically beautiful, because they’re full to the brim with culture, and music, and food and laughter and people and fucking life. The same can’t be said for places like Kure and Hiro.

Kure is a navy town round the harbour from Hiroshima. It has an interesting history, and sometime next year I’ll rouse myself to write more about it. But dear lord, is it ever ugly. Shopping arcades lie empty and unloved, and every building is more generic than the next. Clunky grey shopping centres terrorize the skyline, and the city’s central park is scrubby and joyless. Hiro, further out from Hiroshima, is worse, a sea of low-rise megastores and endless grey. In fact, my deepest disappointment in Japan so far has been the tedious blandness of the small towns I’ve visited. I expected more. 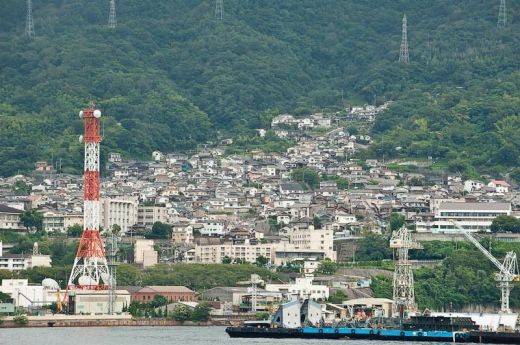 Why are Japanese cities so often like this? Part of it is World War II, of course. The second deadliest bombing in world history wasn’t on Nagasaki, but on Tokyo, where an air raid left 105,400 people dead in one night and burnt a fifth of the city. After the war, Japan was economically devastated and needed to rebuild quickly. But this explanation alone isn’t enough. Kyoto, which avoided the worst of the war bombing due to its cultural heritage, chose to tear down most of its wooden houses and replace them with drab, beige constructions of plaster and plastic.

The problem clearly isn’t lack of money. For all that Japan’s suffered since the 1990 crash, it remains one of the richest countries in the world, and one of the more egalitarian. It’s not a lack of good architects, either. There are tons of architects that are making interesting buildings all around Japan, using materials like brick, concrete and glass in different ways to create lightness and variety. The Peace Museum, too, built in the early stages of Japan’s recovery, is a great building. 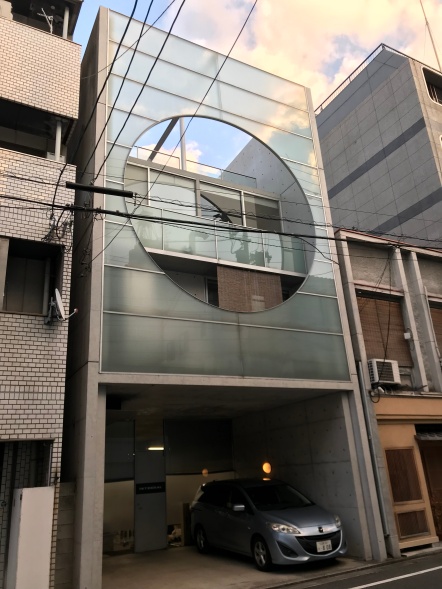 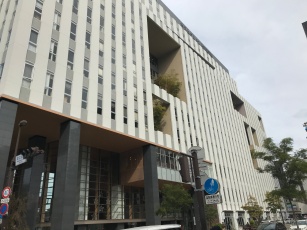 You can only reasonably conclude that most people don’t care that much. People are happy with islands of beauty, and don’t mind surrendering the rest of the city to the grey sea of uniformity. I guess the strange anonymity of concrete cities can have its own allure at times. Still, I wouldn’t mind a bit more beauty in the bargain. 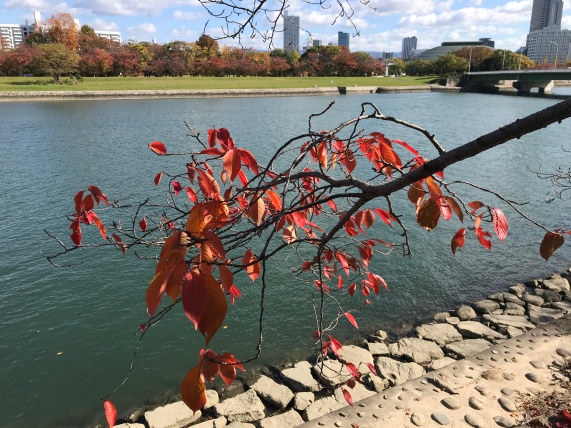 * The question of whether Shintō really has Gods, or is a religion at all, is an interesting one. I’ve spent five months here and it’s dubious whether I’ve really got the hang of it. I plan to write an article about religion in Japan soon though.

** No, I haven’t looked, and I don’t know why you’re asking. What a ridiculous question. You should be ashamed of yourself. Listen, just stop asking me, alright?

*** If you don’t get this reference, go see Abigail’s Party. It’s a classic.