Aug 10, 2018 The Worlds Outside culture and society, japan One comment

At 8:15 AM on August 6th, 1945, the world’s first atomic bomb was dropped on Hiroshima, killing 80,000 people in minutes and levelling the city. I won’t bore you with a treatise on the morality or otherwise of the decision, but I will share an eye-opening revelation- before the bomb was dropped, Stalin had planned to occupy Hokkaido after the war. Whether America’s attack was primarily intended to intimidate the Soviet Union is still hotly debated.

I really wanted to start this article in a different way, but it doesn’t seem possible. The bomb is the unspoken truth of Hiroshima, and affects the flourishing, rebuilt city in all sorts of ways. Most obviously, there are people who survived and who are still living here. I’ve had the pleasure to speak to a doctor who works with survivors at a health check centre. I’ve heard the harrowing story of a man who lost his father to radiation poisoning (his mother is still alive, and is 100 this year). The bomb also affected the physical shape of the city, as new roads were lain down, new districts built and memorials created.

The bomb has also had other, unforeseen consequences. It’s left the people of this city with a particularly acute, and justified, horror of war. As a result, Hiroshima has become an international city of peace, with a claim to the title at least as strong as Geneva’s or Arusha’s. And as so often in Japan, where there’s a culturally or historically important moment, there’s a festival to match it. 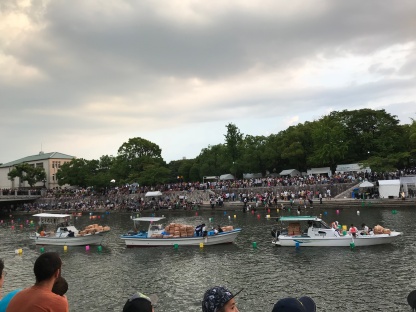 I arrived at the lantern festival shortly before sunset. Boats were skimming up and down the river by the Peace Memorial Park. A small group of peacemakers offered free hugs at by the Atomic Bomb Dome; I asked one of them for a photograph for the blog, and he kindly obliged. He had strong and comforting arms, for the record.

The first lanterns were released a few moments later. The musical accompaniment was eerie and spellbinding- I assumed it was modern experimental music, but after doing a bit of research I realised it was very similar to the religious music of Shinto, Japan’s native religion:

(Side note: what is it with great world religions and kooky hats?)

I bought a green lantern- my political affiliation is kind of unmoored lately, but I know where my soul is. After the last couple of years, I’m not super optimistic about the rancid clownish shitshow that is global politics, and writing some universal hopes on a lantern feels like about the limit of my political activism. I queued up for half an hour with thousands of people, as darkness fell around us.

When I got to the river, I lit my lantern and pushed it softly into the water. It’s kind of pointless for me to go on describing the scene, because pictures can do it much more justice than my words can. But I will say that it was pretty moving to see thousands of lanterns floating downstream, each emblazoned with a personal message of peace. Like Futabayama, which I mentioned in a previous blog, this festival is part of Hiroshima’s commitment to a more peaceful future.

There were other causes being hawked at the Lantern Festival besides peace. Some activists from Fukushima spoke and handed out leaflets with bold claims- the rate of thyroid cancer in children is vastly higher than the government acknowledges, they claim, and a health crisis is being hushed up. I can’t speak for the truth of their claims, but anti-nuclear feeling is strong here. 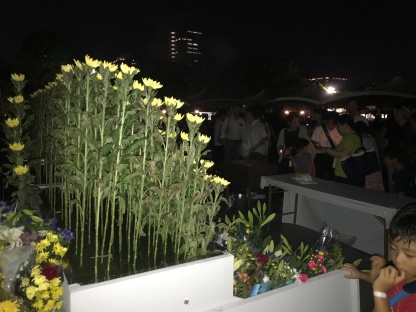 While Hiroshima’s association with peace is tied to the bomb, its history of war is older, in fact, than the city itself. In Hiroshima harbour, the island of Miyajima has its own story to tell. Miyajima is a remarkable place, if a bit of a tourist trap, It’s home to the ‘floating’ Itsukushima shrine, built so the tide rises around its stilts and surrounds its wooden platforms. It’s also the first place where I ever actually swam in the Pacific Ocean (which, frankly, makes all three of the good oceans. The Southern Ocean can go fuck itself.) But that’s a story for another blog post. 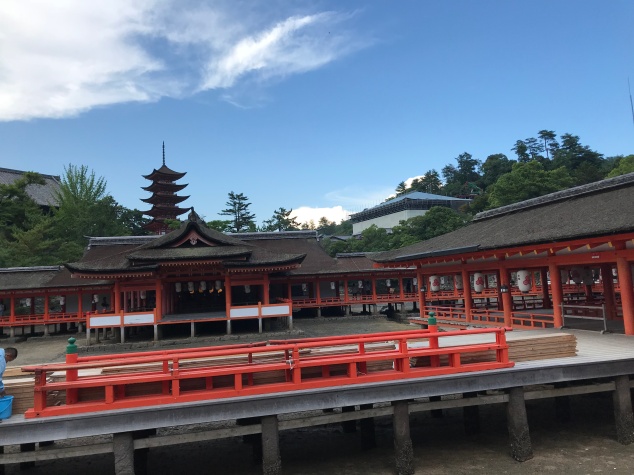 Miyajima already had well-established Buddhist and Shinto shrines when the Mori and Ouchi clans arrived in 1555. Mori Motonari and his soldiers arrived first; the Ouchi clan was being controlled by a rebellious vassal and puppet master, Sue Harukata. Mori’s men found higher ground and launched a surprise attack; the Ouchi army scattered and Sue Harukata committed seppuku. He is buried at Hatsukaichi, a short walk from me. Thirty-four years after Sue’s death, a leader called Toyotomi Hideyoshi had almost united Japan, and work could begin on the construction of Hiroshima Castle.

Hiroshima has other military links- it was home to the Imperial Army Headquarters during the Sino-Japanese War (1894-1895) and was a major naval and army city during the Second World War- this was one reason it was chosen for bombing, although not the only reason. A city of war was rebuilt as a city of peace. I hope that it stays that way.

I’m off work for a week now, so I’ll probably pen a couple more posts before week’s end. Thanks for reading, all.

P.S. so this one was a bit dense with history and politics and stuff. I think the next blog post might be a bit lighter?

P.P.S. thanks for all the birthday wishes! My birthday was a tough day at work, so I didn’t get much chance to celebrate, but I’m out tonight at some bars.